On September 3, 1949, James Agee wrote a critical piece for Life Magazine which was one of their most popular articles ever, and probably the single most influential piece of film criticism every written.  Titled "Comedy's Greatest Era," it was a love note to silent comedy, and the the four giants of that time:  Chaplin, Keaton, Harold Lloyd, and Harry Langdon.  This was written at a time when few had access to older films -- no video or TV, of course, and silent films were only shown in college film series and not to the general public.  It introduced a new generation to these talents. 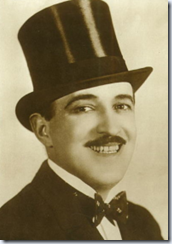 But there was one omission.  In 1975, Walter Kerr pointed it out,  championing the cause of one who may have deserved to be up there*: Raymond Griffith.

Griffith was born in a theatrical family and appeared on stage at the age of 15 months.  By eight he was starring.  He worked in a circus, joined the navy at 15, and in 1916, started acting in films.**  Mack Sennett thought he was more valuable as a writer, so he started doing that until he could find a studio willing to put in in front of the camera.

Griffith's persona was of the upper class:  top hat, white tie, and tails.*** It's an interesting choice; the other big names did not have this sort of persona:  Chaplin was generally poor; Keaton and Langdon, lower middle; and Lloyd, fully middle class.  But he managed to make it work (even in incongruous situations) and became one of the biggest comedy stars of his day.

His best film is usually considered Hands Up!, where he plays a confederate spy during the civil war.****  It has been over 30 years since I've seen it, so I'm fuzzy on the details, but I do remember a very funny film, with good gags and a fine performance.  I would love to see it again.

Griffith's career was doomed when sound came in.  There are legends of movie stars whose voices weren't adequate for sound, but most are exaggerations and only a handful really were hurt by that in particular.*****

But Griffith knew that once the movies began to talk, his career was over.  He was unable to speak above a whisper.  He told the story of how he gave a terribly loud scream on stage as a boy and lost his voice at that instant, but others have said it was caused by diphtheria.  In any case, his career onscreen came to an abrupt halt.  He appeared in only one film (a dying soldier in All Quiet on the Western Front, a role that required that the actor speak in a whisper) and switched to writing and producing.

Why did Agee leave him off the list?  Well, certainly the fact that he had been off the screen for twenty years was a factor.  Chaplin was still making films (albeit slowly) and Lloyd had appeared in The Sin of Harold Diddlebock a couple of years before.  By coincidence, Keaton had a small role in In the Good Old Summertime just before Agee wrote the article, and Langdon actually made quite a few films in the sound era, though mostly as short subjects.  But Griffith had nothing to remind Agee.  He may have thought of him and discarded him, or he may had forgotten.

The result is sad. Not only is Griffith forgotten, but his films have been lost. There was no reason to save them and no Walter Kerr to point out he was better than the run-of-the-mill film comedian.  Right now, it's next to impossible to evaluate how good or bad he was other than with Hands Up! and one or two others.

We may never know how great he really was, but it is clear that he is worthy of consideration.

**At least, according to Griffith, who is not a trustworthy source.

***No word on if he polished up his nails.

****There are some interesting similarities to Keaton's The General.

***** John Gilbert used to be listed as an example, but most film historians now agree that the problem was less his voice than the florid dialog he was required to utter.