Harry Golden led an unusual life.  Born in the Ukrane, he ended up in New York City at the age of three and grew up on the Lower East Side.  He became a stockbroker, but lost his job in the 1929 crash and was convicted of wire fraud, for which he spent five years in prison.  Once released, he moved to North Carolina where he got a job writing for the Charlotte Observer and in 1944 began to put out a bimonthly newsletter called The Carolina Israelite.

If Golden were writing today, The Carolina Israelite would be done as a blog.  It was Golden writing about topics of interest to him and finding an audience for his writings. He started writing nonfiction books on Jewish history to help make ends meet, and in 1958, republished the best of the magazine in a book Only in America. The book was a major best seller and Golden followed it up with For Two Cents Plain. 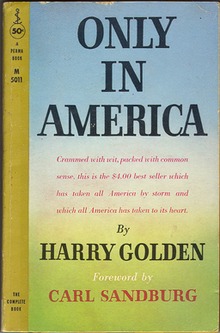 The essays in the book, like much of Golden's writings, fell into three categories.  He wrote on general issues for Jewish Americans of the time, with a unique viewpoint as a Jew in one of the least Jewish areas of the country.  He was also a staunch supporter of racial equality and wrote eloquently against the segregated South. But the most popular essays were when he reminisced about his boyhood in New York before World War I.

The stories were a wonderful look into a different time.  Some of the incidents stick in my mind, like the ritual of buying a boy his first suit.  I especially liked the little scam where the kids would get a flavored seltzer (three cents) for the price of a plain (two cents) -- they'd order plain seltzer then, after paying two cents at precisely the right time, they'd tell the soda jerk to "float" a little flavoring on the drink.  It had to be done right, so that the drink had been poured and the soda jerk had no option but to give a little squirt of flavored syrup to the drink.

Other essays I loved was his analysis of the character of Shylock in The Merchant of Venice, where he shows how Shakespeare subtly undercut the antisemitism in the play.

Golden continued to write.  He stopped publishing The Carolina Israelite in 1968, by which time he had established himself well enough to write books full time.  In 1974, Richard Nixon pardoned him for his embezzlement rap.  His books still remain in print, and are a wonderful look at both the Lower East Side in New York and of life in the early days of the civil rights movement.

Posted by Chuck Rothman at 8:58 PM

Harry Golden was a wonderful man and a wonderful author. I knew him and loved him. He taught me Creative Writing when I was 21yo in Charlotte NC.

I miss you Harry!

Harry Golden is one of America's finest observers of the human condition. He was an exquisite writer who should be required reading in every school. He spanned generations - and didn't miss a dead-on comment or two (or three) on every one of them. He was truly and uniquely one of a kind. I envy those who knew him.

Thanks for the kind words. He was my grandfather and we affectionately known as Papa Harry