In 1976, Norman Lear was riding high.  He produced one smash TV hit after another:  All in the Family, Sandford and Son, Maude, Good Times, The Jeffersons, and One Day at a Time.* And one project that he had been thinking about for a long time finally came together:  a soap opera satire called Mary Hartman, Mary Hartman.

The show was controversial from the start.  Thought it covered many of the same plots and issues in the daytime soaps of the era, it did it much more directly, so it scared off network executives.  So did Lear's production schedule:  from the start, he wanted it to be like a soap opera: episodes a week. He finally managed to sell it on a syndicated basis, but due to its content, it usually ran at 11:30 pm.** 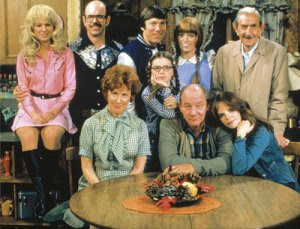 The center of the story was, of course, Mary Hartman (Louise Lasser), a housewife in the fictional Fernwood, Ohio. She was a perpetual innocent (even when talking about some far-from-innocent scenarios) who tried to look on the bright side of things.  When the neighbors are mass murdered and her grandfather (Victor Killian***) is discovered to be the Fernwood Flasher).

Some of the better subplots in the early episodes included Mary's sexual problems with her husband Tom (Greg Mullavey) and her attraction to a police sergeant (Bruce Solomon) who takes a liking to her.  My favorite early subplot involved her best friend Loretta Hagers (Mary Kay Place), who, along with her husband Charlie (Graham Jarvis), were absolutely certain she would make it as a country singer, talent or not.

The show worked very hard to get a soap opera feel.  The sets and the acting mirrors what you saw on daytime soaps, with a very deadpan style.  It was deliberately slow paced, with a very dry sense of humor that came from the characters trying to act ultra normally amid absurd plot twists and their own obsessions.  Much of the humor, like that in Barnaby, depend on a cumulative effect:  it's mildly amusing the first time, but gets funnier as the lines play off what has happened before, especially as you become familiar with the characters.

This does create problems.  Though DVDs have come out, none have tried to create the series one episode at a time.  And while the show was designed so that missing an episode was no big deal, you start to miss things.  Also, clips taken from the show don't really give a good feeling for its genius, since part of the fun is watching the familiar characters doing their thing.

The show was successful, but it took its toll.  A hundred and 30 episodes in two years is a lot of work and eventually Louise Lasser decided to move on.  The show evolved into Forever Fernwood (following Mary's family after she left) and then to Fernwood 2-Night (a talk show parody starring Martin Mull and Fred Willard, who had joined the original show during its run).

The setup of Mary Hartman, Mary Hartman means that it will probably not appeal to younger audiences:  the slow pace is unusual for the MTV generation and beyond. Further, because you need to see the episodes unfold like a soap opera, few are going to give it the time it needs.  It's a shame, because the show was one of the wonders of 70s TV.

*He had flopped with The Hot L Baltimore, though few held that against him.

**This was before there were any viable late-night alternatives to The Tonight Show.

***Killian has the distinction of being one of the few lead actors to not be credited in one of his films, the hilariously bad Unknown World.  The film is very similar in concept to The Core, but with far more ridiculous science.  Between shooting and release, Killian was put on the Hollywood blacklist, so the producer left him off the credits.

Posted by Chuck Rothman at 9:43 PM

I love it! I wish they would release season two on dvd.