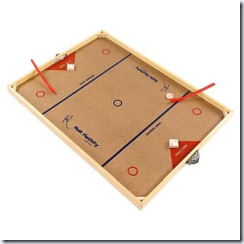 
Nok Hockey has been around for 75 years -- It is still very popular, check it out here: https://carrom.com/product-category/classic-games/ with other great classic games! :)

My mom found our old Nok Hockey board in the basement. The sticks and puck were missing, but we ordered a new set online. The surface of the board is a little dirty. Does anyone have a suggestion of what type of cleaner to use for the surface?