"Guys are Not Proud" (Music) 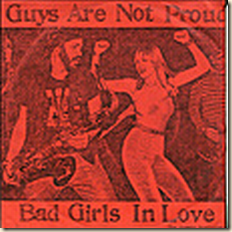 (1980)
by the Anemic Boyfriends
Last.fm Entry

I was a fan of New Wave music; it was an interesting and often funny sojourn in the journey that is rock music.  Our local progressive rock station was big on the genre, playing Joe Jackson, XTC, Elvis Costello, Talking Heads, Blondie, The Waitresses, and many others.  But the real joy was some of the more obscure groups, like the Flying Lizards.  And, of course, the Anemic Boyfriends.*

I don't know much about the group.  No one outside of the group does. Some sources indicate they were from the Pacific Northwest, others that they were from Anchorage, Alaska (or, at least, they recorded there). It may be an all-women group, but there's no certainty of that. But they scored a . . . well not a hit, since it never charted, but a minor success with their song "Boys Are Not Proud."

The song is reminiscent of the Waitresses's "I Know What Boys Like," where the song is delivered almost as a chant that  sounds like a sarcastic put-down.  The lyrics really make you take notice, as feminism run amok:

"Guys are not proud
They’ll do it any time
Guys do not care,
They’ll stick it anywhere
Guys are disgusting
Their always lusting
Guys are obscene
Vile and unclean
Guys are such creeps
They’ll even do it with sheep"

The words are delivered over a reggae beat with a weird little electronic solo between the verses (all the same).  It's goofy and surprisingly catchy.

Obviously, this wasn't top-40 material.  And probably wasn't likely to be a hit anywhere.  But a few critics and DJs loved the song, and it got a reasonable amount of attention, including being part of some "best of the year lists."**

But the group vanished.  It doesn't appear in All Music or Wikipedia and only a few sources indicate they even existed. They evidently released one other singles, but that never even reached the mild level of success of the original.

It's too bad. The song is well worth remembering.

*I always heard it as Anemic Boyfriend, but information on the group is sparse and I don't know if I heard it wrong, or if people added the -s to make it seem more like a group name.  But with New Wave, leaving off the "s" seems perfectly reasonable.

**Hard to tell if this was because the critic really liked the song, or because they wanted to show of their knowledge of what had been released.

official name was Anemic Boyfriends;
most hailed from Anchorage and included both boys and girls.

They are from Anchorage, Alaska, my ski coach was in the band I just found out today... I know at least two of the people were siblings

if you know these guys write a wiki. who the @#$* are they? inquiring minds wanna know. maybe they could makes some money from a re-release.this was a pretty big song. got constant airplay in boston, (probably for a brief time)which was a big town for punk and new wave in the clubs and on the air. the college radio is what i'm referring to, but it think this was played on WBCN, a mainstream station.

Took me about 20 years to find this 7" (for a mere $5 in an eBay auction in which I was the only bidder), as it happens ... I'd heard about it because of a reference in MOTHER JONES around 1980, oddly enough. (Their second 7", Fake ID/Love Attack, isn't nearly as good. Glad I paid only a quarter or so for it in Tucson in the early '80s.)

Same era - different band - heard on 2JJ - "Fighting's Useless Coolness King, My You're Acrostic, Really Something Else". Anyone remember the name of the band? Female vocalist, sweet voice, ???

I bought this a long time ago, when it was out as a single. Love it! Thanks so much for mentioning it, as it's a classic and deserves to be reissued in digital format!

Hi. My name is Dave Tremper. I was the original drummer for The Anemic Boyfriends. We recorded "Guys Are Not Proud" in a small basement studio in Anchorage, Alaska. Shortly thereafter, we played shows in San Francisco and Los Angeles. I also played on the flip side of the 45 of "Guys," a song called "Bad Girls in Love." I left the band in 1980.

I played bass in a band with Kenne Highland and the Goody Goody Gumdrops. We recorded a cover of Guys Are Not Proud in 1997 that was on a split single with another local band called The Doom Buggies. It was also released as part of a four song tape. Our version had a spoken intro of Always Is Always Forever by Charles Manson. 500 copies pressed on Stanton Park records.

Hello Unknown, very interesting about the cover of our song! I'd love to hear your record. Can you tell me where to find it or post it somewhere for me? I have a Dropbox account if you want to just send me the .wav or .mp3..
Dave Tremper

In preparing to play a couple of their tracks on my radio show, I found this link to an extensive interview for the Only Death is Fatal blog. http://onlydeathisfatal.blogspot.com/2014/02/the-anemic-boyfriends-interview-issue-1.html

I actually heard this song played on my afternoon drive home from work in May 1980 on Boston's WBCN and never forgot it. I actually found the record on eBay and bought the digital recordings of their 4 songs offered on Amazon. I still listen to them now and then.