Homicide: Life on the Street (TV) 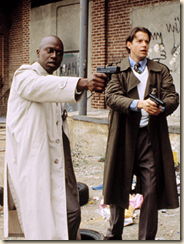 You think a great TV show with a very long run might be better known.  But Homicide: Life on the Streets (usually just called Homicide) was sort of an unwanted child of NBC.  It was never a ratings smash, and garnered few Emmys and only a smattering of other awards (though the three Peabody Awards were nice).  It ran on Friday nights, not the best TV night,* but evidently had enough prestige for NBC to allow it to run for seven seasons and even had a final wrap-up movie that was one of the best of its kind.

It started with Barry Levinson.  He was riding his success in films as a director, several of which were set in his home town of Baltimore, MD.  He and co-executive producer Tom Fontana hired Paul Attanasio (who wrote screenplays for Donnie Brasco and Quiz Show) to create a show from a book by David Simon that followed the homicide squad of the Baltimore police over the course of the year.

The show started with the arrival of Detective Tim Bayless (Kyle Secor) in the unit, led by Lt. Al Giardello (Yaphet Kotto).**  The detectives all have distinct personalities and are all fascinating to watch, but the breakout character is Det. Frank Pembleton (Andre Brugher) -- philosophical, intense, always well dressed, and the best interrogator on the force.

The show really wasn't about homicide; in many ways, it was the least violent dramatic show on TV. The detectives would arrive long after the crime, and what you saw was less a crime show (though it won an Edgar Award as one) as it was a workplace drama -- just one where dead bodies were part of the routine. It was probably the most realistic cop on ever to be on TV, since not all the murders were solved (one "character" was the whiteboard, which listed the cases -- black for solved, and red for unsolved).  Other cases had no mystery at all -- the killer was obvious.

It was the writing that carried the show.  Attanasio had a hand in nearly all the scripts, and wrote compelling dialog and great characterizations.  There were story arcs, some short, some that hung over the entire series (the murder of Adina Watson, Bayless's first case, was unsolved and always affected him).

There were just so many memorable characters it's hard to pick out a few. Det. Steve Crosetti was a conspiracy theorist -- but about the Lincoln assassination -- who committed suicide, leading to one of Pembleton's most memorable moments.  Mike Kellerman (Reed Diamond) had a secret, while Julianna Cox (Michele Forbes) was the medical examiner with a messed up social life.  Det. Kay Howard (Melissa Leo) had to deal with the pressure of being a woman cop, and the fact that she had nothing but black on the whiteboard.  Beau Felton (Daniel Baldwin) was a wild card whose antics got him in trouble.  There were many plots and subplots over the course of the show, but the real joy was the characters and the dialog.

The show was shot with handheld cameras to add to the realism. They managed to use the trick without overdoing it.***

The show premiered after the Super Bowl, a sign of how highly the network thought of it.  But the show never caught on.  It was nearly canceled after the first season, but NBC was persuaded to order four episodes that ran in January of 1994. Levinson managed to convince Robin Williams to guest star, and the show evidently did well enough to be picked up for the fall, where it continued to run.  Occasionally, there would be stunts, like a Law and Order crossover.  Finally, in 1999, the show was over. 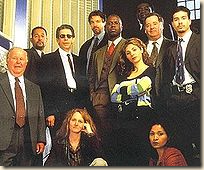 But not quite.  In 2000, the network allowed for one final episode, a two-hour TV movie that united all of the cast members (including several who "died" over the course of the show) into a finale that tied up a few loose ends, some in an intensely dramatic fashion.

Since then, the show never really found a new audience on cable. It required the viewer pay attention (always a problem) and, though it seems to still be broadcast, has been overtaken by shows like Law and Order and CSI, which don't have Homicide's attention to character and well-written dialog.  If the show is remembered at all, it's the one that created Det. John Munch, who has shown up as a character in more different TV shows than any other.

Most of the principals moved on.  Attanasio writes far less these days, though is involved as producer of House.  Producer Tom Fontana went on to produce Oz for HBO.  The rest of the actors moved on.  Other than Belzer's Munch, they have been working, but generally in TV guest star roles; Andre Braugher has starred in a few shows, but hasn't made a big impact.  Clark Johnson probably has done best, with a role in The Wire and by directing TV shows like The Shield.

Homicide itself rarely reruns on cable, and often at bad hours. It's a shame.  As one of the best shows ever to appear on Network TV, it deserves better.

*It was interesting that Friday nights historically has been the place where science fiction shows go to die.

***NYPD Blue, for instance, used to jerk the camera around solely to show it could do so.  As a side note, when the actors appeared in Law and Order as a crossover, they found it strange to see cameras on camera stands.

Posted by Chuck Rothman at 5:05 PM

I was just thinking of the show this afternoon. The movie "Frequency" was on. Watching Andre Braugher as a cop, how he absolutely illuminates that line about "little Johnny... on the radio... in the future" -- reminded me of how much I missed that show, and especially his character.