After the Thin Man 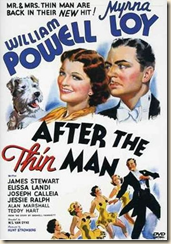 There are probably thousands of Christmas films, and quite a few memorialize Easter or Fourth of July. But few celebrate New Year's Day, and After the Thin Man is still one of the best.* It also belies the general rule that sequels aren't up to the quality of the original.

The movie starts where the previous film, The Thin Man, leaves off.** Nick and Nora Charles (William Powell and Myrna Loy***) take a train to Nora's home in San Francisco right after solving the Thin Man case**** to meet Nora's relatives for New Year's -- and they think she married somewhat beneath their upper class society (he's a detective, of all things!).  Nora's cousin Selma (Elissa Landi) asks Nora and Nick to look into the disappearance of her husband, Robert.  With the help of family friend David Graham (James Stewart), they find a web of intrigue and mystery.

A lot of things make this film work. Number one, of course, is the chemistry between Powell and Loy. At a time where films usually portrayed single people falling in love, or the comic battle-axe wife, the idea of showing a married couple still in love with each other was welcome. Nick and Nora were the type of marriage people aspire to, where they husband and wife still find each other fun and sexy. Their jokes show real affection, even when it's a put down.

The only objection is a more modern one: Nick and Nora drink more than is usual today. It's part of their lifestyle, but calling them alcoholics (as some have) misses the point -- their marriage is a party, and, like every party, a few drinks are no crime.

There is also Asta, the biggest canine star of the 30s. Asta was played by a wire-haired terrier name Skippy and steals as many scenes as possible (as long as Powell and Loy allow it, of course). Asta is probably the best-known names of the Thin Man films, since he is a common crossword puzzle clue.

Finally, there's the plot. Hammett was responsible for the story. Hammett is one of the the 20th Century's greatest mystery writers, and the story is a nice compendium of twists and surprises.  Directot Woody Van Dyck keeps things moving at his usual rapid pace.

James Stewart, of course, went on to be a major Hollywood star.  After the Thin Man was one of his earliest roles, and it's fun to see him cast in a role that isn't much like the persona he's famous for.

The film was evidently a success.  Powell, Loy, and Asta made another four "Thin Man" films in the next decade, of varying quality. They have pretty much been forgotten, especially since the original is close to a movie classic. But you could do worse than watching Nick and Nora spin their mystery/comedy magic.

*I don't care much for The Poseidon Adventure.

**And, no, "The Thin Man" does not refer to William Powell; it was a character in the first film.  The series kept the name despite the fact it wasn't technically accurate, other than that the film actually takes place after The Thin Man.

***As if I needed to identify them.

****Which takes place on Christmas.

Posted by Chuck Rothman at 5:52 PM

The Anemic Boyfriends were a post-punk group from Anchorage, AK. Their 45 rpm single "Guys Are Not Proud" was one of the non-commercial delights of 1980.