Delaney and Bonnie and Friends On Tour with Eric Clapton (music) 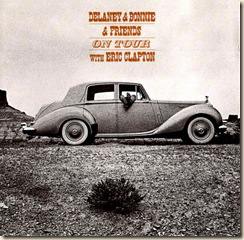 All-star bands of musicians are often disappointments.  The performers often play Alphonse and Gaston, deferring to others and waiting for them to jump in.  The result is subdued, with none of the excitement you get when the musicians perform alone.

The Friends, however, worked perfectly, making one exciting album.

Delaney and Bonnie Bramlett were husband and wife, and long-time musical veterans when they formed the Friends -- a loose conglomeration of people who would sit in on their albums and would perform with them onstage. They were picked as the opening act for the Blind Faith tour, and Eric Clapton quickly fell in love with their music.

Their career had been a series of false starts and record company screwups.  Clapton gave them a hand, getting them a contract with Atco Records and touring with them.  And Clapton brought some of his own friends along -- George Harrison, Bobby Whitlock, Carl Radle, etc.  The Bramletts already knew Leon Russell, and since they were a very impressive live act, their first album for their new company was a live album.

The songs are all blues and hard rocking, written not only by Delaney, but by Russell, Clapton and Traffic's Dave Mason. The excitement is palpable.

One of my favorite moments is introduction of the final song by someone who probably was involved in running the venue.  He introduces the band and the crowd goes wild for each name.  At Dave Mason, you can't believe the roar.  Then he introduces Eric Clapton and it just gets louder.

The album was a big success for the group and should have jump started their career.  Alas, without Clapton's name on the cover, people lost interest and their subsequent albums, while well-received, never made a big splash.

Of course, sharp-eyed readers will have noticed that the core of the Friends were the musicians who became massively popular as Derek and the Dominoes.  In addition, just about everyone in the band had successful careers.

But one of the most successful names associated with the group never played with them.  Take a look at the cover.  You'll see two boots poking out the window of the car. When they were looking for a cover for the album, they just happened to like one image that the photographer had taken for a previous album.  So the picture was used.  The feet belong to Bob Dylan.