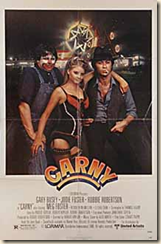 There are many reasons why a film may be memorable, from story, to acting, to photograph, to anything else.  Carny is memorable to me because of one thing:  Meg Foster's eyes.

The movie was something of a vanity project.  Robbie Robertson, guitarist and chief songwriter for the Band, decided to try his hand at movie producing.  And acting.  And writing the story.  And it didn't turn out bad.

Carny is the story of Donna (Jodie Foster), who leaves her waitressing job to join a traveling carnival, after meeting Frankie (Gary Busey) and Patch (Robertson), who have a typical carny act where one person taunts spectators to throw balls at him, dunking him into a tub of water.  And then there's Gerta (Meg Foster), who's job is to seduce men into trying their luck by picking a rope out of a bundle that might be attached to a prize.

The movie is a bit episodic, with Donna being put face to face with the realities of carny life.  It does a nice job of showing the culture of the carnival and how Donna learns the ropes.

But Meg Foster is the real standout, in a bit part.  She has eyes of an arresting shade of blue -- pale as ice -- and as she demonstrates her technique to Donna, you just can't keep your eyes off her. 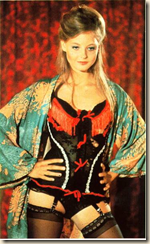 The rest of the film was well cast.  Foster was good (somewhat of a redundancy) as she transitions from child star to adult actress, and Busey and Robertson (who is quite good, especially for someone who hadn't acted before*) fill the bill as partners and rivals for her.  It also fills out the cast with two immortal names in film Elisha Cook, Jr.** and Bert Remsen.***

The film was released, then lost.  It's grittiness, along with its portrayal of all non-carnies as stupid and vicious, clearly kept it from being popular.  Director Robert Kaylor had no track records (he still doesn't only making one more film), and Robertson pretty much gave up acting.  Meg Foster never made the breakthrough she deserved.**** Still, with a good cast, and subject matter that may be more attuned to the 21st century, the movie needs to be rediscovered.

*But not as good as his former Bandmate, Levon Helm.

**Wilmer the  gunsel in The Maltese Falcon

****Her closest thing to a breakout role was as Chris Cagney in the TV show Cagney and Lacey.  Don't remember her?  That's because she was fired after six episodes and replaced by Sharon Gless.

Posted by Chuck Rothman at 5:04 PM