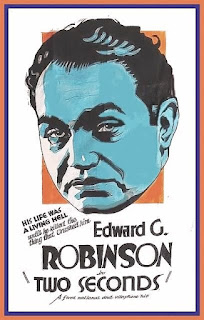 Robinson accurately portrays a descent into mental deterioration, while Osborne – who had been a success on Broadway – is excellent as Shirley, cold and hard as glass. She is in many ways the precursor to the film noir femme fatale of the 40s. Preston Foster is also good as Bud, as he played the role on Broadway.

Posted by Chuck Rothman at 9:06 PM