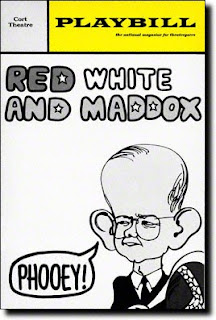 George S. Kaufman once said, “Satire is what closes Saturday night”; in other words it didn’t last beyond the first weekend. And satire, even at its best, only has a short shelf life. It might be fine in the moment, but six months later it is forgotten.* Still, in the right moment, it can be powerful. An example of this was the Broadway show Red, White, and Maddox.

Let me explain about Lester Maddox. He was a pure segregationist who refused to let Blacks eat at his restaurant, even driving them off with axe handles. Once the Civil Rights Act was passed, he shut down his restaurant and ran for governor, winning the office in 1966. He was not quite as bad as his reputation – he integrated the Georgia State Patrol, hired more Blacks to government positions than any previous governor, and did more to foster integration in the state – but his rhetoric and his public comments did not reflect any of that, and he continued to talk segregation for his four-year term.

The play was written to reflect that. Maddox (Jay Garner) is a vicious attack on him for his segregationist and pro-Vietnam rhetoric. Maddox is eventually elected president in 1972, all  while being ridiculed viciously by the play, in dialog and in song. It was a success in Atlanta before moving to Broadway, probably after the success of Macbird!, a satire about Lyndon Johnson and mashup with Macbeth.

It’s Garner’s show. He’s on stage from start to finish, portraying Maddox as a dangerous buffoon who only cared for himself.

But Kaufman was right. The show only ran 41 performances. I happened be at one of them.** I thought at the time that it was nicely vicious.

Of course, it was never revived. No one knows about Maddox these days and the satire has been lost. Jay Garner*** stayed on Broadway, usually playing politicians and statesmen. His best-know TV role was Admiral Asimov in Buck Rogers.

One actor, however, did break out to become a household word. Christopher Lloyd made his Broadway debut in a small role. Another member of the cast was Fran Brill, who later became a puppeteer for the Muppets (Prairie Dawn and many others, including Vazh from The Land of Gorch.).

**I loved satire from when I  was very small. Blame Rocky and Bullwinkle.

***Born James Garner, but that name was already taken in Actors Equity

Posted by Chuck Rothman at 9:28 PM