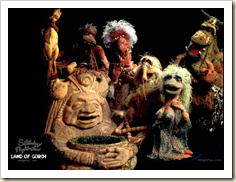 Jim Henson was a genius, creating the Muppets and turning them into a worldwide phenomenon. Though they had appeared on TV shows from Ed Sullivan to The Jimmy Dean Show,* they made their mark when the started appearing on the kid's show, Sesame Street. So, when NBC started a new late night sketch comedy show, Saturday Night Live, they asked Henson to create characters for it.

Given a late night time slot, Henson evidently decided to break away from the blandness of Sesame Street** to create something more in line with a late-night, adult audience.  The result was The Land of Gorch.

This was a series of short sketches that aired during SNL's first season.  Gorch was an alien planet with a desolate landscape, ruled over by King Ploobis (Henson) and his wife Pueta (Alice Tweedy). Ploobis was something of a womanizer, lusting after the maidservant Vazh (Fran Brill). His lackey was Scred (Jerry Nelson), who had a thing for Queen Pueta. The group also worshiped their god, the Might Favog (Frank Oz), a stone statue that came to life wanting various sacrifices.

These were Muppets for adults, and I remember being fascinated when I first saw the sketches. It was quite the undertaking:  our local NBC affiliate didn't show SNL, preferring to run old Sherlock Holmes movies. Instead, I had to pick up the signal from a station 90 miles away.  It was weak, and the images snowy (and I only had a black and white set), but the sight of Muppets having sex in the bushes was something to behold.

Yes, this was a long way from Sesame Street.

The skits were generally good, and it took a few of them until the show reached its stride. As time went on, it began to focus more on Scred, who got most of the funny lines and who managed to be both funny and sweet. The most famous bit was his duet with Lily Tomlin.

This was one of the few of the Gorch sketches that made it into reruns; they were usually the first things cut for syndication. This works well, but most people seeing it have no idea of Scred's backstory.

The sketches raised controversy among the SNL staff.  Half loved it (Chevy Chase, who substituted for them once when the performers couldn't make it, and Gilda Radner); half hated it (Writer and original Not Ready for Prime Time Player*** Michael O'Donoghue famously snapped, "I don't write for felt").

In addition, the Muppets had other things going on. Henson went to the UK to start The Muppet Show and didn't return for the next season. The rest of the puppeteers went with him. There was only one final skit -- set in the Muppe Morgue -- with Lily Tomlin, who obviously loved the characters.

So the denizens of Gorch were shown no more.  Not even Scred, who could have been spun off and used elsewhere, showed up anywhere after the sketches were canceled.

Fans have been wanting a DVD of the Gorch episodes, but it's clear that NBC isn't interested. You'll have to make do with the Tough Pigs transcripts (which doesn't capture such things as the sound of the Mighty Favog's voice, which was hilarious) until them. It's a real shame that this aspect of Jim Henson's career has been lost.

*Yes, the guy who sells sausages.  Before getting into the meat business, he was a successful country singer.

**Bland because it was designed as an educational show for children. While the Muppets could be interesting on the show, they had to fit it into educational lessons (which, I hasten to add, they did quite well).

***From the first show.  But O'Donoghue's comedy is extremely violent (as he said in a sketch, "just random acts of meaningless violence") and after a few months he went behind the scenes.

Cool post. The Gorch sketches are a really weird and interesting part of the history of the Muppets. You may already be aware of this, but the first two seasons of Saturday Night Live are now available on DVD, and all the Gorch stuff is there, so that's one way to see it.

Actually, I had forgotten about the SNL first season DVDs. Thanks for reminding me.

BTW, nice blog you have.

The funny part is that watching the 1st season I find Gorch to be the funniest part of the show.

I've been looking for videos of this outrageous Muppet season on SNL for years.
Without a doubt, it was a highlight of every episode.
Where is my son, the Craterhead?
roflmao