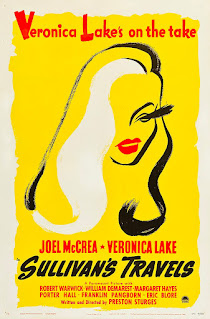 By 1941, Preston Sturges was now a big enough name director to be featured in film trailers, but seemed to be considered less important because he filmed comedies. His next film, Sullivan’s Travels, was clearly an answer to that criticism, and to comment on Hollywood’s penchant for undervaluing comedy.

The movie is about John L.Sullivan (Joel McCrea), a Hollywood director who yearns to tackle serious subjects. When his next project, a serious look at poverty in American called O Brother, Where Art Thou* is turned down, Sullivan, who has never actually been poor, decides to go of on his own as a hobo in order to see real life.  On the way, he joins up with a woman (Veronica Lake) who is sympathetic to his “plight,” but who becomes furious when she realizes he is very well off.

Sullivan starts out again. His identification is stolen and he ends up in a prison farm, looking for a way to straighten anything out.

McCrea handles the comedy well, especially since the character as egotistical and somewhat naïve.

Veronica Lake was a 40s phenomenon, a major star mostly due to her hairstyle, a long lock that fell down over her right eye. Sullivan’s Travels was one of her several successes of the time. But her career started collapsing after only a few years. She cut off the long hair at the request of the Defense Department, since women workers copying the style were getting it caught in machinery. She was less distinctive without it, and she had already developed a reputation of being difficult to work with. A drinking problem added to her fall. Her later years had few successes and she ended up leaving Hollywood, even spending some time working as a waitress.

The movie didn’t do as well as Sturges’s earlier ones. It got some good critical buzz, but the seriousness of the theme worked against it.** It also was

**Ironic given the fact that the film was a complaint against too much seriousness. But much of the film shows people in poverty and the big scene takes place in a theater filled with prisoners. Of special note was that one scene portrayed a Black church and portrayed Black parishioners respectfully. It’s a sad commentary on Hollywood values of the time that this was enough to get a commendation from the NAACP