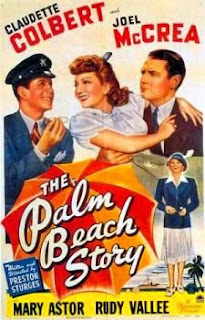 After Sullivan’s Travels, Sturges dropped the obvious social commentary and went back to straight comedy. The Palm Beach Story is a return to pure screwball comedy, with some themes that snuck by the Hayes office.

Tom (Joel McCrea) and Gerry Jeffers (Claudette Colbert) are a couple whose marriage is falling apart due to financial stress. Gerry decides that the way to relieve it is to get a divorced, so after getting some money from the Wienie King, she takes a train down to Palm Beach. But on the trip down, she meets millionaire John. D. Hackensacker (Rudy Vallee) and sets her sights of marrying him after she’s free. She then expects to use the money to help out Tom, who needs it to finance a new invention. Tom, learning about her plan to divorce, flies down to Palm Beach to stop her, and ends up involved with Hackensaker’s sister the Princess Centimilla, an oft-married femme fatale. Also involved in the trail trip is the Ale and Quail club, who are going down to Palm Beach to shoot (and to drink ale).

The plot is complicated, with confusion over who’s  pretending to be who, with a bizarre twist at the end that cuts through all the problems.

It’s mostly Colbert’s movie and she shows her usual comic gift.* McCrea is fine, but is overshadowed by the other character actors around him. Mary Astor has film immortality from The Maltese Falcon, and in this case that mercurial personality is perfect for the part. Rudy Vallee was considered a washed-up crooner; the part gave him a new  lease on his career. And, of course, the Sturges stock company was there, headed by his favorite, William Demarest as one member of the Ale and Quail Club. 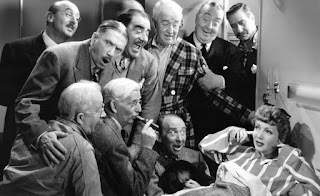 The censors found a lot to object to in the early drafts of the script, most notably the notion of divorce,** the many marriage of Centimilla (they cut down a few), and the idea of a married woman romancing Hackensacker. But Sturges made some cuts to get the movie films, and always had a way of getting past the censors when he wanted to.

The return to comedy was a success and The Palm Beach Story is a classic of screwball  comedy.

**It was rare for there to be any sign of divorce in movies, and in comedies the divorcing couple always ended up back together at the end. The first portrayal of a divorced woman who didn’t go back to her ex, and who managed to make a successful life afterward was probably in Miracle of 34th Street, where Doris Walker has successfully moved on.

Posted by Chuck Rothman at 7:36 PM