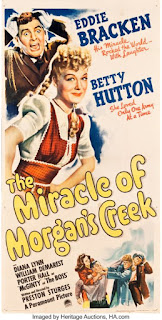 Sturges’s next film is my favorite, a glorious combination of bawdiness and slapstick. The Miracle of Morgan’s Creek is one of the greatest of Hollywood comedies.

The film starts out with a scene in the Governor’s office, where McGinty (Brian Donlevy) and the Boss (Akim Tamaroff)* receive a phone call about a crisis in the town of Morgan’s Creek. Then we go back nine months, where Trudy Kockenlocker (Betty Hutton) decides to go out partying with a group of soldiers who are shipping out. She wakes up the next day with a crazy story she tells to her sister, Emmy (Diana Lynn): that she met a soldier named “Ratzkywatzky or Zitzkywitzky” and, seriously drunk, they decided to get married -- under assumed names, of course. They even decided to use a cigar band for the ring!  Funny stuff until Trudy discovers a cigar band on the ring finger of her left hand.

Of course, there is no evidence of the marriage and a single mother in 1942 could only have disgrace in her future. Luckily, there is an option: Norval Jones (Eddie Bracken), who has been in love with her for years at a distance, is the perfect fall guy. Norval is clumsy and awkward, and do anything for Trudy. It is complicated by Trudy’s father, Constable Kockenlocker (William Demarest), who complicates the matter when trying to help.

This was pretty bawdy stuff for the time. I note  that Trudy had to be married before getting pregnant, undoubtedly because the censors would wouldn’t allow anything else. There was also the name “Kockenlocker,” which is spoken an inordinate amount of times (in one scene with him, Norval ends every sentence with “Constable Kockenlocker”). It certainly hints at something fairly obscene. Sturges always tried to stretch the bounds of what the Hayes Office allowed, and this was a particularly edgy example.

Eddie Bracken was not a major star when cast in the role of Norval. He plays the stuttering and slightly stupid nice guy to perfection and makes the movie work. Betty Hutton was something of a sex symbol but shows herself an adept comedienne as the sweet but slightly dumb Trudy. And contrasting her is Diana Lynn’s more sardonic sister.

But the real delight is William Demarest. He was always a treat in Sturges, but this was his biggest role so far, and his bluster and crustiness (with a heart of gold beneath) is wonderful from start to finish.

A favorite scene of mine is where Constable Kockenlocker is trying to get Norval to break out of  his jail without being obvious about it. So you have him saying something like, "If you take the keys from my belt, you can unlock yourself when I'm looking," only to have Norval reply, "Oh, I'd never do that, Constable Kockenlocker." Demarest's frustration is worth the price of the movie.

The movie was a massive success, Paramount’s top-grossing film of the year.

Posted by Chuck Rothman at 1:25 PM