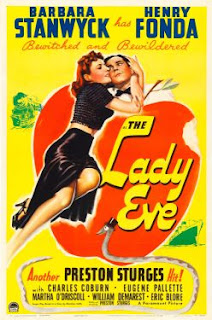 We continue our overview of Preston Sturges with his next hit, They Lady Eve. His success with The Great McGinty and Christmas in July allowed him to use some top-of the line actors in a movie that’s a comic retelling of the Garden and Even.

Jean Harrington (Barbara Stanwyck) is a con woman  who works in tandem with her father Colonel Harrington (Charles Coburn). On a ship, they set their sights on Charles Pike (Henry Fonda), an rich heir who is traveling home after an expedition to the Amazon to study snaked. Jean makes a play for him, and hooks him easily, but the con falls apart  when the falls in love with him. Even worse for her, Charles’s valet, Muggsy (William Demarest) does some snooping of his own and discovers the truth. Charles dumps her.

Jean, angry and jealous, gets back at Charles by posing as the Lady Eve Sidwich and quickly raps the naïve Charles around her finger. And the complexities grow.

Both leads are, of course, first class. Henry Fonda is not often classed as a comedian, but he could handle it with the best of them, and by playing it all straight, it makes it al funnier. The same can be said of Stanwyck, who clearly is having fun with the role. She makes a great comic temptress, exuding too much sexuality for Charles to stand. The entire movie plays with the Adam and Eve there, except now Eve tempts the man who studies snakes.

I can’t go without mentioning William Demerest. The plot depends on Charles not realizing Jean and Eve are the same woman and Sturges had the audacity to let the audience know that it’s just a convention.  Muggsy spends much time trying to convince Charles of that, but Charles refuses to listen.

Sturges love for bawdiness is in full  string here, especially in a scene where Eve tells Charles all the men she’s  been with.  He gets around the censors by just showing Charles’s reaction.

The movie was another hit for Sturges and began to show his forte for bawdy situation and great slapstick.

Posted by Chuck Rothman at 5:28 PM