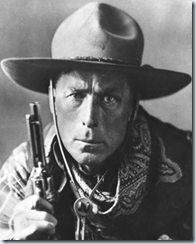 One of the earliest narrative films genres was the Western, and William S. Hart was one of its biggest early stars by doing something that was unusual in Hollywood Westerns not only in his time, by many years afterwards:  by insisting on making as realistic story as possible.

Hart was born in 1864 and began acting in his 20s, joining various companies and traveling around the US and finally becoming a moderate success on Broadway.*  But Hart was always fascinated by the West.  He knew Wyatt Earp and Bat Masterson, and somehow managed to acquire Billy the Kid’s guns.  He performed in a couple of stage westerns on Broadway, but moved West in 1914, where he quickly became a star, first in short subject, and then in features.

Hart was a stickler for realism; he wasn’t a white knight on a horse, but rather a real man, who would wear old clothes and deal with historical events.  And it caught on:  by 1915 he was Hollywood’s biggest star.  Audiences appreciated his gritty look at the west, with the strong moral sense and relatively sophisticated stories.  He looked the part of a hard-nosed man scrambling to make it in a difficult place.

But by the 1920s, he was falling out of favor.  Audiences began to prefer the cleancut good guy of Tom Mix and others to Hart’s more down-to-Earth version.  After the disappointing box office for Tumbleweeds in 1925, Hart retired from film.

Posted by Chuck Rothman at 7:37 PM