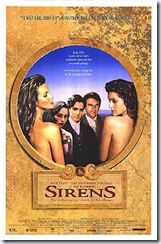 Sexual themes have been common in movies since the beginning, but sensuous ones far less so.  Sirens is one example of the latter, and one of the best.

It’s set in Australia between the World Wars, where a young minister Anthony Campion (Hugh Grant) and his wife Estalla (Tara Fitzgerald) travel to the estage of the artist Norman Lindsay (Sam Neill), an acclaimed artist, known for his flouting of authority.  Campion has been sent to determine if a work the church has commissioned is going to be appropriate.

Lindsay* has them stay, where they meet his wife Rose (Pamela Rabe) and his two models Sheela (Elle Macpherson) and Giddy (Portia de Rossi, in her first film role), and their maid Pru (Kate Fisher). The group is something like a stereotypical hippie commune, especially in the talk of sexuality and a lot of casual nudity.

Campion and his wife are shocked, but also intrigued.  Estella slowly becomes enmeshed in the group’s sensuality and has it open new possibilities to her.

The movie is best known now for the nudity, of course.  Elle Macpherson was a supermodel, appearing on the Sports Illustrated swimsuit cover three times at the time the movie was produced.**  Screencaps quickly appeared all over the fledgling Internet.

The movie was one reason for Hugh Grant’s stardom, being released about the same time as Four Wedding and a Funeral.  He plays what has been his usual act of charming awkwardness, but it still seems fresh and unmannered.  Tara Fitzgerald has always been a favorite of mine in films like Brassed Off, Hear My Song, and The Englishman… and is wonderful as she slowly succumbs to the sirens’ charms.

Director John Duigan has been successful in Australia, but few of his films made a big splash in the US.  Sirens is a treat for those who love to revel in the feelings of sensuality.

*Based upon a real artist by the name, though the story is made up.  A  movie based on Lindsay’s autobiographical novel, Age of Consent, was made into a film in 1969.

Posted by Chuck Rothman at 8:52 PM