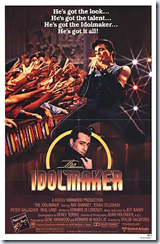 The Idolmaker is a story about obsession in the music business.

Vincent Vacari (Ray Sharkey) is a songwriter in the late 50s.  He had a great deal of talent, but this is at a time when talent was less important that having a good image.  Vicari’s looks weren’t good enough to cut it, so he went to find someone who could.

He found Tomaso DeLorusso (Paul Land), a saxophone player who had the right look.  Vacari played Pygmalion, turning DeLorusso to “Tommy Dee” and making him into a rock star.  But Tommy had a mind of his own, and Vacari goes to prove he could do it again, by finding Caesare (Peter Gallagher), a busboy, and controlling his every move.  Of course, Caesare also has issues.

This is Sharkey’s film; he dominates the screen as the talented but obsessed Vacari.  It was a strong performance and won him a Golden Globe.  And while Sharkey worked regularly, he rarely had starring roles.

This was the feature film debut of director Taylor Hackford, who did And Officer and and Gentleman two years later.  It was also the first feature for Peter Gallagher.