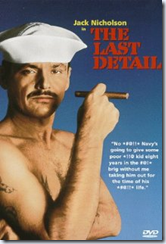 In the early 70s, after years of small roles in some very forgettable pictures, Jack Nicholson broke through to stardom with his turn in Easy Rider.  He soon was cast in Five Easy Pieces* and Carnal Knowledge.  Nicholson like doing odd, small films, and one of his most acclaimed role of the era was in The Last Detail.

Nicholson plays Billy “Badass” Budduski, a petty officer in the navy.  He and Richard “Mule” Mulhall (Otis Young) are assigned to take 18-year-old Larry Meadows (Randy Quaid) from Virginia to the brig in Portsmouth, NH. Meadows had been court martialed and convicted of stealing $40 from a collection box.  It might have been a minor offense, only the box was from the favorite charity of the commander’s wife and the book was thrown at him:  eight years.

The movie is the story of their trip.  They have a few days and Budduski decides to give Meadows the time of his life:  drinking in Washington, seeing his mother in Philadelphia, skating in Rockefeller Center.  Few things work out well, though, even when they take Meadows to a hooker (Carol Kane**), there are problems:  fights and disappointments, but Meadows keeps charming Budduski to keep helping him do his best.

The movie gained Nicholson his third Oscar nomination, and Quaid got a best supporting nomination.  Robert Towne’s screenplay was also nominated, but none won.  It was a critical success, but not a box office smash, partly due to the fact there was just so much profanity in it.

Director Hal Ashby had made two successful but not smash movies before this**** and he later went on to win an Oscar for Coming Home.  and Robert Towne had a successful career, teaming up with Nicholson again for Chinatown.  And Gilda Radner had a bit part, a few years before SNL premiered.

Overall, a fine movie that was at the start of the careers of several big name talents.

**Very memorable in a small role.

***It’s sad that his life has become a train wreck.

**8*Harold and Maude gained promenance over the years, but was only a moderate success at first.

Posted by Chuck Rothman at 8:46 PM