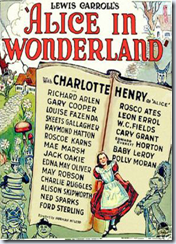 Alice in Wonderland is nearly impossible to dramatize.  The biggest hurdle is the story really has no plot:  Alice meets one odd character after another, has a strange conversation, then moves to the next.  In addition, Alice has no backstory* and other than being intelligent and matter of fact, there’s not much depth of personality.

In 1933, when Paramount decided to film the book, they did something that had never been done on such a large scale:  they used an all-star cast.   Every major character in the books was played by a big-name Paramount star of the, making it have more big names than any other film made before.

The story starts out with a bored Alice seeing the white rabbit in the garden.  But instead of following, she goes through the looking glass and meets up with some chessmen, among other things.  Then, seeing the rabbit again, she follows, where the story starts following Wonderland.

The film’s strength is in its special effects and costume design.  Writer William Cameron Mendes was primarily a set designer and worked hard to get the looks right.  Given the technology of the time, they not bad today, if a tad bizarre.***  You really couldn’t see most of their faces, since they also decided to use costuming and masks to make them look like the characters in the book. 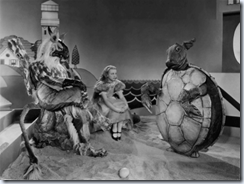 Charlotte Henry is just fine as Alice, but most of the actors, while professional, seem to treat the role for what it is:  a brief cameo where no one can tell who they are without the credits. Cary Grant is definitely unexpected as the mock turtle,** and W. C. Fields is a obvious choice for Humpty Dumpty.   Still, the movie does stick more to the story of the original book than most adaptations and keeps a lot of the incidents and dialog intact.  There’s a animated version of “The Walrus and the Carpenter,” and the Mad Tea party is pretty much intact.  Indeed, other than the short sequence with the mirror, the film follows the original book better than most adaptation.

When released, the film was an expensive flop.  Audiences had a hard time suspending disbelief when watching people in costume, it seems.  It gave rise to conventional Hollywood wisdom that you can’t do this type of fantasy, and it wasn’t until The Wizard of Oz that it was tried again.

The actors in the film weren’t hurt by its flop; a side effect of being unrecognizable.  Charlotte Henry made more films, but never transitioned from child star to adult.

The film was pretty much forgotten once Disney put out its animated version in 1951.****  Disney didn’t care much for his version, putting his finger on the problem when he said, “Alice has no heart.”

The film has faded from memory, but overall still has plenty of joys.

**Of note to film buffs is Cary Grant’s ad lib in His Girl Friday when he refers to Earl Williams by that name.

***I’m surprised that this wasn’t a favorite film to see when you were high – maybe because it was in black and white.

Your suggestion that AAIW is "nearly impossible to dramatize" seems a bit bizarre. I am helping to run the site at lewiscaroll.org. We do not even try to keep track of how many amateur and school productions of Alice there are. And of course LC was involved with many theater productions in his lifetime. Now if you are suggesting that corporations do not know how to make a mass-market movie, I would agree. Indeed, the most successful of these efforts is Burton's and he did this by not having it be about AAIW at all. It just borrows some names. But for people (one's that breathe, not ones that give political money), it obviously _is_ accessible. Hundred of productions around the country every year suggest this is true.