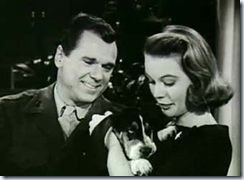 More often than not, child actors’ careers are over at puberty.  The transition to adult actor is difficult, even when they want to continue in the business.  Jackie Cooper was a major child star in the early 30s, starting out in Our Gang* comedies and getting an Academy Award nomination for Skippy.  He worked regularly until the war, but struggled afterwards** to reestablish himself.  Luckily, TV came along and he started with guest roles and as part of the repertory company for Robert Montgomery Presents.  But he tasted success on the small screen with The People’s Choice.

Cooper played Sock Miller, a young politician in the town of New City, California.  He was dating Mandy Peoples (Patricia Breslin), daughter of the town’s mayor (Paul Maxey).  The show centered on the romance – witch took an unusual turn at the end of the second season:  Sock and Mandy got married.  Unfortunately, fate required that they keep the marriage secret until Sock made enough money to support her in the style Mayor People’s wanted. 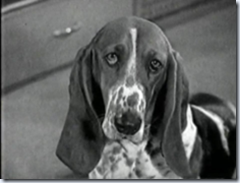 The big star of the show, however, was Cleo (Bernadette), a basset hound.  Voiced by Mary Jane Croft, Cleo would comment on the actions with sardonic asides.  This was still a relatively new concept,*** but it was more than just a cute idea.  Cleo was genuinely funny and whenever the camera cut to her (often wearing some weird getup like glasses), audiences knew a zinger was coming.

The show was created by Irving Brecher.  He had was a very successful Hollywood screenwriter, best known for having the sole writing credit for The Marx Brothers’ At the Circus and Go West.****  He also had an uncredited role in the screenplay of The Wizard of Oz.

The show was also interesting in that it showed progression in the characters over its run.  Sock had different jobs, his marriage to Mandy was revealed, and other things changed as time went by.

The series ended after three seasons.  Cooper, now firmly established as an adult TV star, went right on to another long-running TV series, Hennessey about a navy doctor.  He continued in guest roles and is probably best known to modern audiences as Perry White in the first three Christopher Reeve Superman movies.

The People’s Choice is an overlooked gem of the 50s.

**One of his films, Kilroy Was Here, paired him with the big child star of the teens, Jackie Coogan.

***Charles M. Schultz had only created Snoopy a year or two before.

****Other writers were probably involved, and the Marx were known to ad lib a lot – and no one could write for Harpo.  But Brecher is the only writer to get a sole credit for any of their films.

Posted by Chuck Rothman at 1:37 PM

I remember really enjoying this show, and Cleo especially. But I'd love it if you did a post on Hennessey, which I think was way ahead of its time in many respects and which has almost completely been forgotten.

I saw this show in reruns and one episode stood out for me.

Sock is flirting with a pretty lady at her home.I believe it was done because Sock was teaching his girl,Mandy,a lesson about jealousy.He knew Mandy was secretly watching Sock & the lady(who was just playing along at Sock's request.

The woman's boyfriend unexpectedly arrives on the scene,sees what's going on & rushes into the house.

Before anyone can explain to the boyfriend what is really going on he grabs Sock.
Sock tells him that he better let go of him or his dog Cleo will attack.

Cleo is hiding under a chair and not about to intervene at all.

The guy punches Sock who staggers backwards into a chair that flips over.

Mandy rushes in & she & the woman began talking about how this was all a plan to stop Mandy from being so jealous about Sock.

Off camera we hear punches thrown & connecting & grunts and groans.

Next day the 2 couples have sorted everything out & are sitting around a coffee table with Sock's back to the camera.

The other man has a single bandage on his jaw & comments how Sock sure knows how to throw a good right hook.

We now see Sock's face. Two black eyes & he covered with multiple bandages.
He came out far worse from the fight.He was pummeled.

I saw this episode over 50 years ago & still recall it vividly. Felt really sorry for Sock.