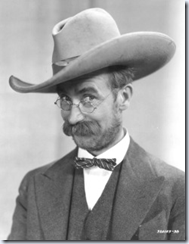 Moviegoing was a different experience in the 1930s.  No multiplexes, of course, and instead of there being a single movie on each screen, the show went on all evening, with cartoons, newsreels, previews of coming attractions,* and, of course, short subjects.  Nowadays, people are generally only aware of two of the major short subject series:  The Three Stooges and Our Gang (The Little Rascals), but there were many more, and one of the longest lived series were those starring Andy Clyde.

Clyde was born in Scotland, the son of music hall performers.  He moved to the US in 1912 and broke into silent movies with Mack Sennett in 1922, where he established his character – an old man with walrus moustache and wire-rimmed glasses.  He soon began to star in a series of silent short subjects and moved easily into talkies.

When Columbia started doing short subjects, Clyde, who had a contract dispute with Sennett, was the first person they hired.  The Andy Clyde comedies were a mainstay of their program.  He appeared in 77 films until the unit was shut down in 1956, in addition to 68 before joining Columbia.

Clyde always played a father or uncle.  He was mostly a physical comedian; his big strength was his ability to do a double take.

In addition to his series, Clyde appeared in features, often as a comedy sidekick in 40s westerns, since his persona fit the “grizzled old prospector” images to a T.

The end of the short subject didn’t mean the end of his career, and Clyde moved easily to television, appearing as a guest star, usually in westerns.  He had recurring roles in The Real McCoys and Lassie, and popped up on shows as diverse at Gunsmoke, Dr. Kildare, The Bob Cummings Show, the People’s Choice, and many others.  He continued to work regularly almost up until his death in 1967.

Posted by Chuck Rothman at 3:35 PM