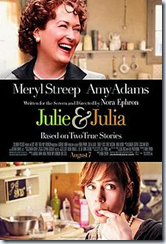 Nora Ephron was a writer known for her humor articles, but as a filmmaker and screenwriter, she made her mark with romantic comedies like When Harry Met Sally, You’ve Got Mail, and Sleepless in Seattle.  Her final film was also a love story – not only between people, but people united by a love of good food.

Julie Powell (Amy Adams) is stuck in a depressing job dealing with victims of 9/11.  In order to maintain her sanity, she makes a decision:  she would cook every recipe in Julia Child’s Mastering the Art of French Cooking in a year, and blog about it as she went along.

Meanwhile, we see Julia Child (Meryl Streep), a woman who is living in
France and isn’t sure of what to do with her life.  With the help of her husband Paul Child (Stanley Tucci), she learns to cook, and makes the decision to write a book about cooking.

The movie cuts between the two stories.  Julie goes into her  project with enthusiasm, also with the help of her husband Eric (Chris Messina) – at least at first. 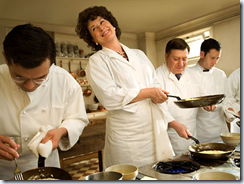 Meryl Streep’s Julia dominates the film.  She is a woman who, once she gets started, accomplishes whatever she wants.  One of the most astounding realizations is that Streep – though not a tall woman – manages to make it believeable that she is really Child’s height of 6’2”.  She managed to play as though she is a big woman throughout.

Stanley Tucci is just wonderful as Paul.  It is probably the most joyful and successful portrayal of a happy marriage in films since Nick and Nora Charles.*

Since Ephron is best known for her romantic films, she was probably attracted to this aspect of the story.  Her touch with dialog and character was sure and insightful, and the love story more touching than some of her more fictional ones.

Amy Adams is also fine, but does take a back seat to Streep’s strong role.

The film got Streep an Oscar nomination, but otherwise made little impact.  It was Ephron’s final film before her death in 2012.

Posted by Chuck Rothman at 9:01 PM

I saw that one, too. If you delete the "Julie" part, it's rather good. Streep is, as usual, teriffic.

As you say, "My Life in France" is a great biography. (Remember the part where Paul is called "Tarzan of the apse"?)