Hearts of the West 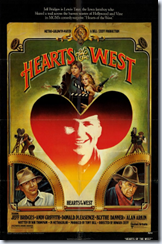 Howard Zieff is a director who never quite reached his promise.  He started out with a funny road picture called Slither (No, not the more recent horror film of that title), about search for a missing fortune, then went on to direct several successful and easy to like comedies:  House Calls (with Walter Matthau and Glenda Jackson -- a big hit in its time), The Main Event (Barbra Streisand and Ryan O'Neill) and Private Benjamin (Goldie Hawn), and My Girl (Macauley Culkin, which he was still big).  Then, his career came to a halt:  nothing since the early 90s.

It's a shame.  Zieff was able to create quirky and interesting characters, and certainly seemed to have a commercial touch.  I don't know what happened to him, but I wish he did more.

Hearts of the West is my favorite.  It's set in the 1930s, where Lewis Tater (Bridges) a wide-eyed farmboy with dreams of being a writer of westerns, leaves home for Hollywood.  Without planning it, he ends up being a western movie star and wooing Blythe Danner.  Andy Griffith (an actor I didn't care for previous to this*, but the role made him a favorite) was an older, more experienced movie cowboy who turns out to be Tater's hero.

It's a move that loves moviemaking.  Bridges makes some rookie mistakes, like volunteering for a stunt without asking for more pay and suffering the consequences, and getting involved in a couple of crooks.  And it's also about one of my other favorite subjects:  writing.  It does contain one of my favorite movie lines of all time:  "Anyone can say he's a writer. But when someone else says you're a writer, then you're a writer."  Very true, not only in the context of the movie, but in writing overall.

One of my favorites too!

Speaking of Griffith: have you seen his film debut: A Face in the Crowd (1957)

I missed that one, but read about it. It's loosely based on Arthur Godfrey.

Any actor who thinks he might get typecast from his first role ought to see this one.

Anyone who appreciates great film and has not yet seen A Face in the Crowd is in for a real treat -- truly a forgotten masterpiece.

Griffith doesn't get anywhere the credit he deserves as a serious actor, but watching this film will fix this for anyone. Truly a staggering piece of work

His other largely forgotten masterpiece is No Time for Sergeants, though perhaps one had to actually spend a hitch in the US military to even get the humor. I spent 1964 to 1985 in the Army and find it hilarious and often not far from the truth. My wife finds it merely entertaining, but obviously misses some of the humor.

Griffith is one of those comedians that you wish had done more serious roles instead of comedy. Jackie Gleason (Soldier in the Rain, Requiem for a Heavyweight, The Hustler), Mickey Rooney, and many others.

I have often heard that comedy is by far the hardest genre for an actor, so I have often thought that most great comedians could do extraordinary dramatic work.