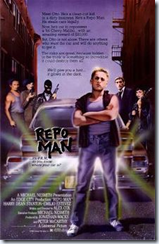 It’s hard to pull off true weirdness in a full-length film.  Weirdness usually works best in small doses; too much and it just gets silly.  Repo Man manages to be as weird as possible from start to finish.

Otto (Emilio Estevez) is a “middle class punk” fired from a dead-end job as a stock clerk in a supermarket.  Bored and depressed, he runs into Bud (Harry Dean Stanton) who offers him money to drive his wife’s car out of a bad neighborhood. After he’s chased by a couple of very irate men, Otto discovers that Bud is a repo man, repossessing cars for a living.  Otto joins up, and discovers that there’s a $25,000 reward for repossessing a missing Chevy Malibu – with something very dangerous in the trunk.

The film is filled with strange set pieces and sight gags.  Otto’s parents are mesmerized by a TV evangelist, unable to look away from the screen.  Their house is supplied with cans of food (which is what it says on the cans: “Food.”  The bottles are labeled “Drink”).  One of the men in the agency (Tracey Walter) philosophizes:

A lot o' people don't realize what's really going on. They view life as a bunch o' unconnected incidents 'n things. They don't realize that there's this, like, lattice o' coincidence that lays on top o' everything. Give you an example; show you what I mean: suppose you're thinkin' about a plate o' shrimp. Suddenly someone'll say, like, plate, or shrimp, or plate o' shrimp out of the blue, no explanation. No point in lookin' for one, either. It's all part of a cosmic unconsciousness.*

One of my favorite subtle jokes is Bud talking about the Repo Code:

Stanton’s Bud is also fascinating to watch.  He’s tough, but also very much off kilter, regaling Otto with stories and bizarre observations. 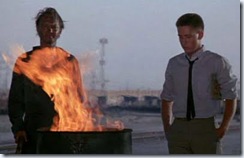 Tracey Walter made a career of playing scuzzy characters but actually can draw on a real personal sweetness that makes his Miller the center of attention in every scene he’s in.

Estevez*** has perhaps his best role as Otto, a slacker before the term was coined.  He has not much in his life until he becomes a repo man, and he takes to the wacky lifestyle with a matter-of-fact joy.

This was Alex Cox’s first feature film.  His next, Sid and Nancy, was a critical success, but he never made much of a splash after that.  His films also grew more serious and his attempt to recapture Repo Man with Repo Chick in 2009 barely made a ripple.

The movie may not be for everyone, but if you like something completely funny that keeps you off balance throughout, you can’t do much better.

“Let’s all get sushi and not pay.”

**A related point is that the driver of the Malibu bears a striking resemblance to Isaac Asimov.  And, while we’re name dropping, one of the producers of the film was former Monkee Mike Nesmith (and Iggy Pop did the theme song).

***Do I have to mention he’s Martin Sheen’s son and Charlie Sheen’s brother?  At the time the movie came out, I did.

Posted by Chuck Rothman at 9:33 PM