1961 was a great year for American history buffs.  It was the 100th anniversary of the most important event in US history after the Revolution:  The Civil War. Celebrations and commemorations were everywhere.  Life Magazine had a six-part series on the war, written in part by Bruce Catton, the best-known writer in the field.*

The concept was simple:  at the beginning of the year, the war was still evenly matched, so either side could win.  So the North and South would fight to see if the result was the same as history. 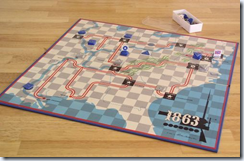 The pieces (carefully cut out of the magazine and pasted on cardboard) were square tokens for infantry, triangular ones for cavalry, and gunboats, which were shaped like the bottom of a steam iron.  Infantry moved one space at a time, cavalry two, gunboats three – but only on water.  Infantry can move three spaces if they use a railroad.

Battles were won by whichever force was larger; pieces were stacked on top of each other to move together.  The larger force would win, but lose one fewer piece than the defenders:  if it was four against three, you could wipe out the three and have two units left.  Or you could decide to wipe out only one unit and have no losses at all.  If you captured certain key cities, one (for the South) or two (for the North) pieces were removed from the board.

As I played the game, I discovered a secret:  the South usually won.  While they started with fewer pieces than the North, they had better interior lines of control and could create strong defenses by concentrating troops.  It was difficult for the North to gather enough pieces to win a battle.  Meanwhile, the Southern forces could attack where the Northern troops vacated; since they could remove two pieces (10% of the North’s forces) if they captured a key city, and the North only could remove one (6%), a capture was worse for the North.

I used to have friends choose which side to play.  They always took the North.  I counted on that.

The game was popular, and Parker Brothers created a commercial version.  The game pieces were plastic, with a slight knob a the top and an indentation on the bottom, so they could be stacked and not fall over.  After I lost the original bits of cardboard, I got this version and continued to rewrite history.

I can’t find much about when Parker Brothers discontinued the game, but it seems likely the sales dropped after the Civil War centennial.  War games caught on at about that time, too, and compared to them, 1863 was pretty tame and was not realistic in the slightest.

But it was fun.

Posted by Chuck Rothman at 4:06 PM

Thanks for the overview. I am presently playing my nephew by mail - we each have a set of the game. I am playing the South in this game; the next time we play, I'll be the North and see if I can't come out victorious.

Thanks for this blog! I did an eighth grade term paper based on the game, similar rules with a much larger hand-drawn map (in early 70s) and got an A+.

Tanks for the info. Love strategy board games. So who ever takes a city the opponent has to remove 1 or two of it's pieces from anywhere on the board?

I remember the game. I cut out the pieces and pasted them on cardboard. It was fun, and it was the first war simulation I ever played. As I recall, the Southern Calvary could retire to the Appalachia mountain, and it was hard for the North to pin them down. Thanks for the memory.

I loved this game back in the day and still have a playable set. I recently got to play with my 12 year old grandson and we had 6 good matches. I have found that the north can usually win if it is patient. This means covering its cities with small fortified units, keeping cavalry in both east and west, even suffering some defeats as long as it bleeds the south. Oddly, I think a lot hinges on cutting off the south’s lone gunboat in the west and destroying it before going after southern cities. I usually keep a tight but flexible defense in the east and maneuver in the west. Anything can happen, though. It’s a great game.