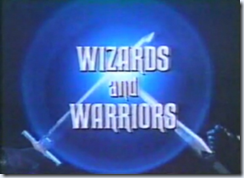 Fantasy is expensive.  Until CGI (and even after), it was difficult to create a convincing epic fantasy world without spending a lot of money.  It’s even more difficult in TV,* so you kind of wonder how a show like
Wizards and Warriors got greenlighted, especially before franchises like
Lord of the Rings and Harry Potter vastly expanded the audience.

Though it did help that it was good.  And funny.

The show follows Prince Eric Greystone (Jeff Conaway**), engaged to marry Princess Ariel (Julia Duffy) and bound to defend it from Price Dirk Blackpool (Duncan Regehr) of a neighboring kingdom.  As their names should indicate, Greystone is a good guy, and Blackpool is filled with evil plans, usually with the help of his Wizard, Vector (Clive Revill). Greystone has Marko (Walter Olkewicz), the strongest man in the kingdom and who talks to horses, as his aide.

The show never took itself seriously.  The funniest character was Princess Ariel, a medieval Valley Girl who was spoiled and flighty.***  Blackpool was your typical over-the-top villain played for laughs.

Everyone is clearly having fun.  Revill and Regehr make great comic villains, and Duffy is terrific in every scene she was in.

But the show never caught on.  In addition to the hard sell for high fantasy back then, the show was also still finding its way in the early episodes.  Also the mix of comedy and adventure was ahead of its time; years later, shows like Hercules and Xena managed to find a way to create a mixture.  Add to that the fact that the show was expensive to produce, even using a lot of stock footage and cheap sets, and it boiled down to CBS cancelling it after only eight episodes.

Julia Duffy moved from here to Newhart, where she played the same type of character.  Jeff Conaway struggled with roles and drugs until he was rehabilitated a decade later in Babylon 5; it didn’t last and he died in 2011.

**This was his first series role after leaving Taxi.

***The most memorable line from the series was her declaration, when taken to an Inn, “I’ve had fun before.  This isn’t it.”

Posted by Chuck Rothman at 8:13 PM

WOW!! I have visit your blog. So Cute!! Thanks for providing us a useful knowledge from your blog.

I had forgotten about this show. It was great while lasted. Thanks for the memory.

FYI - there's a fan site dedicated to the show at http://www.wizardsandwarriors.org if you'd like to view it - fanfic, show stuff, interviews with Don Reo and others...