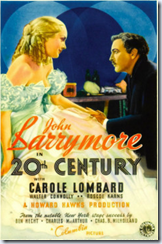 There isn't a really good definition of "screwball comedy" other than the classic, "It's what I'm pointing at when I say, 'That's a screwball comedy.'"  The genre thrived in the 30s and was a combination of romantic comedy and farce, only with more fast-talking verbal wit.  Twentieth Century is one of the earliest examples of the form, and still a very funny film.

The story hints at its stage origins in that it can be divided into three acts. The first shows Broadway director Oscar Jaffe (John Barrymore) starting rehearsal for his new play.  He had unveiled his new discovery, Lily Garland (Carole Lombard) -- actually a first-time actress named Mildred Plotka, who is just terrible in the early rehearsals, much to the dismay of his accountant, Oliver Webb (Walter Connolly) and to the amusement of his wisecracking publicist Owen O'Malley (Roscoe Karns). But Jaffe insists he can make her into a star and we see him bully, cajole, trick, and seduce her into a successful performance.

The play opens and Lily becomes a star.  She as Oscar are a great team, but Lily decides that she needs to get away from him and his control.  She quits and goes to Hollywood.  Oscar says she'll never amount to much.

Of course she does, and, at the same time, Oscar's fortunes flag.  After a few years, it reaches the point where he desperately needs to hire her back as his lead actress or end up in jail for all the money he owes.  After a disastrous performance in Chicago, Oscar has to sneak out of town on the Twentieth Century Limited, the express to New York.  And, of course, Lily Garland is aboard, ready to sign a contract with Max Jacobs (Charles Lane*), Jaffee's main competitor.  Oscar has to try to convince Lily to sign with him.

The script is funny to begin with, but what really makes the movie special are the performances of the leads.  John Barrymore may be the only of the Barrymore siblings not to win an Oscar, but he was the biggest star and arguably the best actor of the three.**  He was a matinee idol of his time -- the Great Profile -- but seems to enjoy playing comedy and even kidding his own image***.

Carole Lombard was chosen by director Howard Hawks for the role. She was an unknown at the time and Hawks fought to get her the part.  She is wonderful, starting as the scared and timid Mildred and evolving into Lily, who is a female version of Oscar -- just as strong and sure of herself as he is.

One of the main jokes of the film is that Oscar is always playing a part, acting and overacting to get what he wants.  Lily also starts playing that game, and there are several delightful scenes where the two of them are acting at each other and reacting as though they don't realize the other is playing a role.  Both Barrymore and Lombard manage to walk the tightrope of making their overacting seem realistic and very funny.

Despite everything, they make it clear they love each other, even though they would never lower their guard long enough to admit it honestly, or to believe it if they heard it.  And all they know about love, really, is theatrical melodrama, not honest emotion.

Roscoe Karns is also delightful.  He is the Greek chorus of the movie, commenting on events with the cynical wisecracks of the 30s.

Howard Hawks directs in his usual matter-of-fact style, ensuring the each scene moves along to gain the maximum effect.

The movie was a big success, and created Lombard's career.  It was later turned into a successful Broadway musical.

______________________________________________
*Charles Lane was one of the great character actors in Hollywood, appearing in hundreds of movies and TV shows, usually as a sharp-voice nasty man whose distinctive voice made him easily identifiable.  In 1937, just to pick a year, he appeared in sixteen films, often with no more than one or two lines, and he talked about showing up on one set in the morning, saying his line, and then going to another set in the afternoon. He is best know for his recurring role in Petticoat Junction, but also was one of Potter's assistants in It's a Wonderful Life. He lived to be 102, and never officially retired.

**Lionel, of course, is best remembered as Mr. Potter in It's a Wonderful Life, but most of his roles were similar: an irascible old man, either mean, or kindly.

***At one point, he is forced to don a putty nose to hide his identity.  Later, he starts playing with the putty, stretching it out like Pinocchio, and making sure it is seen in profile.

Posted by Chuck Rothman at 5:41 PM

Just a clarification: Lombard was hardly an unknown when she made "Twentieth Century" in early 1934; she had been a full-time film actress for nearly a decade, though an auto accident that caused scars on her face in 1926 sidelined her for about a year and led Fox to drop her contract.

Lombard returned as part of one of Mack Sennett's later girl troupes, moved on to Pathe in 1928 and '29, where she was the female lead in three early talkies (but was dumped because she too closely resembled Constance Bennett, whom the studio had just signed). She resurfaced at Paramount in 1930 and gained some amount of stardom. However, Carole yet wasn't a first-tier actress, ranking behind the likes of studio stablemates Marlene Dietrich, Miriam Hopkins, Claudette Colbert and even Sylvia Sidney. Paramount really didn't know what to do with her, and to be honest, Lombard wasn't sure herself.

It was Harry Cohn at Columbia who better realized Carole's star potential than Paramount did. Beginning with the snappy "Virtue" and the underrated "No More Orchids" (both 1932), Columbia gave Lombard better vehicles than her home studio, and "Twentieth Century," the fourth of five films she would make at Columbia, put her on the map as an actress. By 1935, Paramount got the message, finally giving Carole a first-rate vehicle with "Hands Across The Table."

I do a blog dedicated to Lombard in particular and classic Hollywood in general, and I cordially invite you and your readers to check it out: http://carole-and-co.livejournal.com