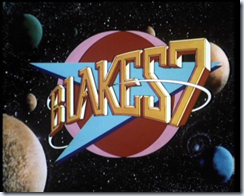 During its run, it was considered one of the best British SF series ever, but now it's mostly remembered for the awful way it ended.  But Blake's 7 is still first-class science fiction.

It's set in the future where the Federation is in charge.  But this isn't the Star Trek Federation -- is an evil dictatorship.  Roj Blake (Gareth Thomas) was a revolutionary who has been drugged to remain docile.  As he starts to remember, he's charged with pedophilia, and put on a prison ship.  Of course, he manages to overpower the guards and -- luckily -- find a passing alien spaceship of very advanced design.  Blake dubs the ship "The Liberator" and gathers a motley crew of criminals who try to overthrow the Federation.  They are known as Blake's 7.

The members of the original crew were: 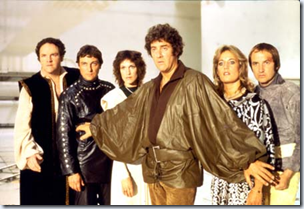 Blake starts causing trouble with the Federation, and their Supreme Commander, Servalan (Jacqueline Pearce) makes it her business to take him down, using her best soldier, Travis (Stephen Greif, later replaced by Brian Croucher*) to find him.  So it becomes a battle between the Federation and the Seven.

The series was created by Terry Nation, the writer who launched the Daleks into the world. The mood was dark -- that Blake was fighting a gallant but possibly losing battle, not just against the Federation, but with his crew.  This is no Star Trek.  Vila is not interested in fighting, and Avon has no intention of being a hero.**  The group quarrels, disagrees, and commanding them is like herding wildcats -- though Blake manages to get his way most of the time.

The characters are all memorable, but the standouts are Paul Darrow's charismatic Avon and especially Jacqueline Pearce's Servalan. She is a wonderful villain -- clever, subtle, sexy, and dressed all in white.

And the show had a very dark side.  Main cast members died, starting with Gan in the second season.  But there are always seven, so he was replaced with Orac*** (Tuddenham again), a super smart computer that might be able to predict the future, and with a testy personality.

And later, Blake himself is missing.  Avon has the Liberator, but starts fighting the Federation, though keeping his acid tongue and superior air.

The show had three great seasons, but started dropping in quality by season four.  Part of this was that they has planned to end thing after three seasons and had to scramble to build a plotline.  Also, Servalan changed, losing the qualities that made her a great villain (her wardrobe changed from white to red to black, a clear signal that she was becoming less interesting).  She became more standard, though there are hints of romance between her and Avon.

The show had a painfully low budget, even by BBC standard (see the logo, for instance), but the end was a complete shock -- the entire crew of the Liberator was gunned down, and even the ones who were still alive elsewhere were reported dead.  There is a little wiggle room***, but it was clear that the show wasn't going to be back.  Fans were outraged and blamed the BBC's general dislike for science fiction as the cause, though it does look like it was the creators' idea. And, strangely, the ending did seem to fit in with the series' streak of pessimism.

In any case, Blake's 7 was one of the gems of televised SF.

**One of my favorite exchanges happen when something explodes and Avon pushed Blake out of danger.  Afterwards, Blake says, "Thank you... why?"  Avon replies, "Automatic reaction. I'm as surprised as you are."  His line, "I'm not stupid; I'm not expendable; and I'm not going" was a great catchphrase.

***I used to use Orac as the shutdown sound for my computer:  "I am closing down. I have much to do. You have engaged my circuits on your petty affairs for far too long."

****They cut to black before Avon was shot, and it's possible the Federation guards had their phasers on stun.

When series four was killed off, all the stories in the British sci-fi mags were that it had all happened rather quickly. When series four started, everyone thought that there would be more series to come as the BBC had given it a significantly bigger budget than the previous series, which could be seen on screen as the sets didn't wobble as much and they often included actual computer screens! (well, BBC Micros connected to portable TVs!) Better models filmed on film rather than video, and no pictures of models on bits of card that were then animated frame by frame! They even did a dreadful remix of the opening theme!

Series four was slightly different from the previous series because the Federation had suffered some rather major setbacks (due, in no small part, to our band of heroes)and was no longer the massive, all-powerful entity that it had once been - think Star Wars universe after the destruction of the Deathstar and the death of the Emperor - Servalen is on the run from her former minions - hence the change in name and wardrobe - and looking for revenge and a way back into power...

Addition: There was also a book that was set after the final TV episode, where we find out that Avon has a smarter sister and that not all of the crew of the Scorpio (the ship that came after The Liberator) died!

I can't remember what the book was called but I'm fairly certain that it was published in the UK by Sphere.

Blake's 7 was like a jolt to the brain after having watched Pertwee and Baker era Doctor Who as small child. I was intrigued by it and it remains some of my favorite sci-fi television.

I'm not usually one for parodies, but there is an amusing short film called Blake's Junction 7. The crew finds themselves in a roadside service center in the UK.

I loved Blake's 7 - I used to watch on KUED, when I was stationed in Utah (log story there) and managed to tape the whole run on VHS. Great series, although the budget for special effects was obviously even lower than your average American kiddy Saturday morning adventure series. But great characters and great writing made up for a lot!

It was very popular in Bulgaria when I was kid :) We loved to play games based on the series :)

It would be difficult to overstate the intensity of the crush I had on Servalan when PBS started showing this in New Jersey. And I wasn't 14, either. I forget the exact year when WNJN ran it, but I'd estimate that I was 28 with a year +/-. And, yes, she was less interesting as Sleer, but she was still interesting.