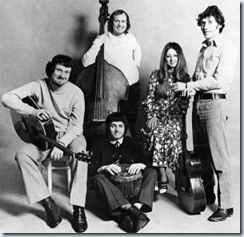 In memory of Bert Jansch.

The Pentangle was one of the most acclaimed groups of the British folk-rock scene in the 60s because they included five virtuoso musicians playing an eclectic mix of folk, blues, pop, and whatever else.

The group started with Bert Jansch and John Renbourne.  Both were already highly accomplished and influential acoustic guitarists when they met and became roommates.  They loved playing music together and their album Bert and John showed a strong talent for writing and arranging songs.

While playing, singer Jacqui McShee sat in and they soon discovered that her voice meshed perfectly with Jansch's.*  They soon added bassist Danny Thompson and drummer Terry Cox, who had played together in the Alexis Korner Band.  With five members, the name Pentangle seemed natural.

The group was unusual for the time in that they played only acoustic instruments.  But they were amazing at it.  McShee had a sweet and pure soprano that worked so well with Jansch's rougher tones.  Both Jansch and Renbourne were masters of their instrument, as was Thompson, whose upright bass playing was perfection itself.

The group's first two albums -- The Pentangle and Sweet Child**  -- were critical successes, and their third, Basket of Light, also was popular enough to reach #5 on the British charts.   Here's "Light Flight," from that album:

After the success of Basket of Light, though, the group made the mistake of switching producers and recording an album of traditional folk music. Cruel Sister flopped.  The album didn't sell, since it it stuck with an area that was far less popular than the combined genres of their first three albums and, with only five songs on it, there was just not enough variation for continued success.

The group released two more albums, but their hearts weren't in it.  Jansch and Renbourne had been releasing solo albums during this time and Pentangle was more of a side project with them.  The group broke up in 1972, with occasional reunions.

**I just noticed that Sweet Child has a version of "The Trees They Are So High," a traditional folk song. The song has special meaning to me, since one version, arranged by composer Benjamin Brittin, was dedicated to my father.  See here for details.

Posted by Chuck Rothman at 6:34 PM

JD(not the one with the picture) said...

One of my favorite music memories is of John Renbourne and Stefan Grossman playing at a friend's house in 1978 or '79. The playing was spectacular and the repartee hilarious.

I have the feeling you're slightly confused. The group went by the name Pentangle (not "The Pentangle"), and the musician's name was John Renbourn, not Redbourne.

You're confused Alexander, they certainly were known as The Pentangle. And they are hardly "forgotten"!