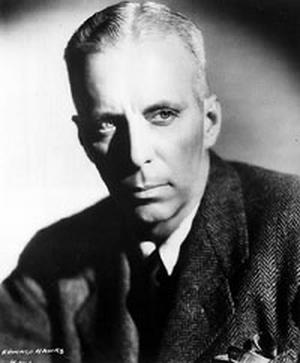 It's odd how critical opinion waxes and wanes.  And no one shows this as much as Howard Hawks.  He directed as many classics as any filmmaker you can name, and Andrew Sarris named him as one of his pantheon directors in The American Cinema in 1968.  Yet during most of his career, he was ignored.  He only got one Oscar nomination, and his name was overlooked by most American and UK  critical film studies before Sarris.  But Sarris started a boom in his reputation, which put him among the front line of directors.
Now, not so much.  When people think of directors of his era, they think of Hitchcock, or John Ford, or maybe Orson Welles, of William Wyler or John Huston.  Hawks being overlooked.
Why?  Most likely because he switched genres and studios so often that it's hard to keep track of him.  A Hitchcock film is nearly always a thriller, but a Hawks film could be a comedy, or a western, or a drama, a gangster film, and action-adventure film, or even science fiction.  But he's managed to direct so many films that make list of tops in their genre, that he rates plenty of attention.
Hawks entered the movie industry in 1924, and started directing films the next year.  He went on to direct 47 films, many of which are classics.  Some of the better-known ones include:
Comedies
Drama
Westerns
Other
So why was Hawks ignored for so long?  I think his versatility counted against him.  He also wasn't a particularly "stylish" director.  I don't mean to say he didn't have a style all his own:  he was the master of overlapping dialog***** and he tended to focus on smart and competent men and women doing difficult tasks.  But his style didn't call attention to itself and was so simple and direct that it looked easy.
In his career, Hawks helmed 48 films, with a track record that put him among the greats.  I plan to highlight a few of these films in the future.
____________________________________________
*Grant appeared in may of Hawks comedies, happy to play something that subverted his usual screen image of debonair charm.
**There is a character named "Judy" and Grant say her name a lot, though not three times in a row.  Probably at least part of the origin of "Judy, Judy, Judy" as the Grant imitators catchphrase.
***Hawks claimed he was fishing with Hemingway and tried to persuade him to write for the movies.  Hemingway wasn't interested, but Hawks claimed he could take Hemingway's worst book and turn it into a film.  Hemingway asked him what his worst book was, and Hawks told him, "To Have and Have Not." Luckily for Hawks, Hemingway agreed.
****The film is credited to Christian Nyby, Hawks's long-term film editor.  But Hawks produced and everyone agrees that he had a strong hand in the production. Hawks said he let Nyby get the credit as a favor so he could join the screen directors guild.
*****Where characters don't wait for others to stop talking before they speak.
Posted by Chuck Rothman at 3:58 PM

Just stumbled across your blog while "blog walking". I'm a movie buff and a big John Wayne fan so naturally a fan also of Howard Hawks. Nice post.

Howard Hawks is forgotten? By whom? I own about 8 of his movies on DVD. And he is mentioned a lot on TCM. Oh and John Wayne was a gunfighter in El Dorado. Robert Mitchum was the Marshall.

Interesting note re "To Have and Have Not". Although the title is taken from the Hemingway novel of the same name, the story itself was adapted by Faulkner from a short story entitled "A Day's Crossing". The story line in the movie resembles the novel not at all.