Those Lips, Those Eyes 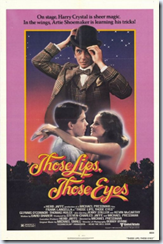 In 1980, Frank Langiella was primarily a stage actor who hadn't made (and didn't seem interested in making) the jump to films.  He had made a version of Dracula that didn't set the world on fire and which nobody remembers, but little else.  Perhaps his love of the stage was why he appeared in Those Lips, Those Eyes.

It's the story of Artie Shoemaker (Tom Hulce), a young man who was bitten by the acting bug and got a job running props for a summer stock theater in the 1950s.  But Artie is inept and nearly loses his job when actor Harry Crystal (Frank Langiella) rescues him and take him under his wing.  Harry helps Artie get back on his feet and also provides a little assistance with his crush on chorine Ramona (Glynnis O'Connor).

The film is mostly a charming slice of life, and affectionate look at the stock theater of the time.  Artie's father (Jerry Stiller) tries to discourage him and get him to finish med school, while Harry shows him the glamour of the stage.

Langiella is at his best.  His Harry is a born showman, a man with enough talent to dream about Broadway roles, but not enough to actually get them. He dominates every scene he's in.*

My favorite was toward the end of the movie.  The play is being performed, and Harry is phoning in a performance, tired and feeling the work isn't worthy of his talents.  Then he hears word that a Broadway agent is in the audience.  He immediately turns it on, becoming mesmerizing on stage.

Despite good reviews, the movie did poorly.  It was the high point of Michael Pressman's directorial career, though he has worked steadily in TV ever since.

______________________________________________
*Though, even at his best, Hulce was not a dominating actor.  He usually played a schlub, becoming known on the big screen as Larry Kroger in Animal House.  Larry was a recurring character in National Lampoon's Dacron, Ohio, stories -- the owner of the yearbook in their High School Yearbook Parody -- and always very put upon.  As a matter of fact, when I heard he was cast as Mozart in Amadeus, I thought it a horrible choice, but I didn't know what the play was about, and he did an excellent job.

Posted by Chuck Rothman at 7:27 PM

Hmm, haven't ever heard of this one. I reviewed Langella's "Dracula" a few weeks ago at my blog:

It's interesting but lacks fangs...literally.

I liked the '79 Dracula, even with its disco-y feel. John Badham directed, if memory serves. The screenplay was written by W.D. Richter who also did the '78 script for Body Snatchers and lives forever in cult infamy as the director of Buckaroo Banzai: Adventures Across The Eighth Dimension.

That said, Those Lips, Those Eyes is not a film I recall as great. Maybe too much Artie and not enough Harry? Sort of like how Michael works as long as Michael is around, but not so much otherwise.

I do remember Glynnis O'Connor having a body on her. She was just fresh from the beach movie California Dreamin'. I don't remember what she was supposed to have seen in Artie, tho'.