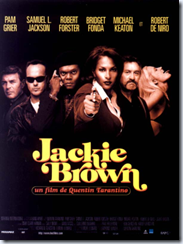 Quentin Tarantino burst on the movie scene with Reservoir Dogs and quickly laid claim to being one of the top film directors of his time.  It was one of the greatest writer-director debuts* in history and when he was given a Hollywood budget, the result was Pulp Fiction, a great film on all levels.  His over-the-top violence and ear for dialog, as well as his way of getting great performances, showed him as a major talent.  Since then, the Kill Bill movies were masterpieces, and Inglourious Basterds was a fascinating piece of of a combination of war film and alternative history.

But Jackie Brown, which followed Pulp Fiction, tends to be overlooked.  It is the least typical of his films -- slower paced, with far less graphic violence than anything else -- but it is as good as any of his others.

The  movie's clever plot plays out with all sorts of surprises, but the center is the relationship between Jackie and Max.  They are two of a kind -- both world weary and beaten down, but, perhaps, still someone romantic underneath.  It's one things that Tarantino doesn't usually deal with:  tenderness.

Pam Grier is perfect as Jackie -- strong, willful, and clever.  She had previously made her mark in Blaxploitation films of the 70s** and she was on no one's list of great film actresses prior to this.  It was a revelation to see her here. And Forster was never able to click as a movie or TV star, despite some decent roles; this is also his best.

The rest of the cast is as good as you can expect them to be.***

The film was clearly a success, but, for some reason, the movie is often forgotten when Tarantino's name comes up.  Maybe it's because it's a more narrow genre than his other films, or that there's less violence, or that it has a deliberately leisurely pace.  But it's one more milestone in a great director's career.

**The movie has many homages to both her work and the genre.

***Micheal Keaton liked the character of Ray Nicholette so much that he portrayed him again in the unrelated Out of Sight, also from a novel by Leonard.

You have an error in your description. Jackie didn't smuggle drugs. She smuggled money. Out of the US into Mexico. Robie was an arms merchant and kept his money in Mexico. He used Jackie because that way no one could ever prove it was his.