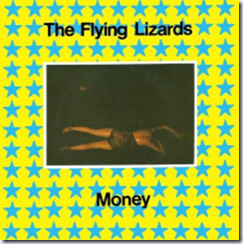 Back in the late 70s, there were two main new visions for new music. One -- punk rock -- was a revolt against sophistication in music, trying to put rock back to its primal roots.  The other -- New Wave -- was far vaguer in its definition, but leaned toward more sophisticated and artistics versions of songs.  And on the fringes of both were groups like The Flying Lizards.

David Cunningham was a record producer with an interest in the avant garde.  He started fooling around with doing covers of classic rock songs with very minimalist instrumentation, and a weird vocal -- more talk than song -- by Deborah Evans.  Their first attempt, Eddie Cochran's "Summertime Blues" seemed to have nothing but a drum track and various electronic sound effects.  The song didn't do much, but their next attempt, Barrett Strong's "Money" hit pay dirt.

The song was a minor hit.  The bizarre minimalism* coupled with the monotone vocals, made a song that you either turned off immediately, or which grabbed your attention.  The song got to be #5 in the UK, and came close to making the top 40 in the US, but was a mainstay on the progressive rock stations of the era.

The group was signed to do the two singles, but naturally an album was produced.  It just barely charted.  The Flying Lizards name continued, with Cunningham's avant garde music, but even though critically acclaimed, it did poorly commercially.  Cunningham went back to production and folded the project.

Posted by Chuck Rothman at 8:06 PM

A wonderful, um, band, it's a shame that they got saddled with the novelty label. Frankly, I always found the covers - lacking in passion, while full of fun - to be their least interesting work. My favourite will always be 'TV', in part because of this:

Quite appealing to an adolescent... as I was then.

"Money" is indeed a great track.. and a kind of conversation killer at parties.. people stop talking and just listen to it.

I was very happy to be reminded of this group. Checking the Wikipedia page I found that this "punk professor" http://en.wikipedia.org/wiki/Vivien_Goldman was their main vocalist.