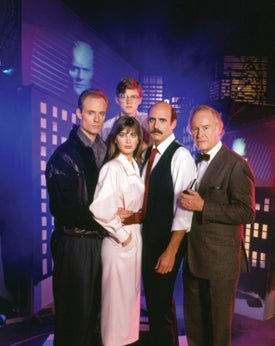 Posted by Chuck Rothman at 4:18 PM

Loved me some Max Headroom !

If I remember correctly, the US version of the pilot episode was almost an exact scene-for-scene copy of the original UK version. The music in the UK version was done by Midge Ure and Chris Cross, both of Ultravox fame. Midge Ure was also a co-founder of Band Aid. Amanda Pays (I had a massive crush on her!) who played Edison Carter's editor/sidekick annoyingly married Corbin Bernsen of L.A. Law fame! PAH! (Not that I'm jealous! Much!)

I've been re-watching it lately and sad to say it doesn't live up to my memories. Really dark and muddy lighting. I'm sure they were going for the noir look but it looks a bit cheap. Also some of the stories are great ideas that looked like they could have used a bit more production time to really pull off.

Last thing I'd like to say is the surprising thing that the old style monitors didn't bother me as I expected they would. The really old keyboards they used set the stage fora mish-mash tech/kitch feel that really works to this day.