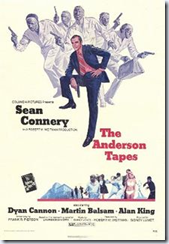 In Memory of Sidney Lumet

Sidney Lumet is known as a top director of message films starting in the 1950s.  Coming out of TV, he made his mark with 12 Angry Men and went on to direct things like The Pawnbroker, Fail-Safe, Serpico, Prince of the City, Dog Day Afternoon, Network, The Verdict, and other films with strong social messages, often set in New York City.  Though the films are rightly praised, I tend to find that his message came off as heavy-handed, often sacrificing the plots and characters to it.*

One exception to this was The Anderson Tapes, a case where he managed to keep the message out of the spotlight, so that it had far more power than when the audience is constantly reminded of it.

The Anderson Tapes is a caper film.  Duke Anderson (Sean Connery) is released from prison and plans one big job:  the robbery of an entire apartment building in one day.  He gathers a gang, but needs financing, which comes in the form of Mafia kingpin Pat Angelo (Alan King), who wants Anderson to take care of a little problem he's been having.

But there's one thing Anderson doesn't know:  all the planning for the crime, from start to finish, is overheard as various people eavesdrop on various people.

The trick, like any caper film, is building suspense, and this is suspense in the pure Hitchcock definition.**  By all rights, the plan should have been nipped in the bud.  The question is who will realize what's going on?

Connery at the time was a top movie star, and clearly welcomed the chance for a meaty role that had nothing to do with James Bond.  And the cast list practically guaranteed great performances.***  And Lumet's point was never made more deftly:  the growth in surveillance that had already become a concern in 1970s.****

The film was made cheaply and was well regarded, but not up to the level of Lumet's other films and Serpico and Dog Day Afternoon overshadowed it.  But I think that The Anderson Tapes is one of his most successful films.

**Hitchcock defined suspense as when the audience know the hero is in danger, but the hero does not.

*** Minor roles went to Margaret "Wicked Witch of the West" Hamilton (her last film role) and Garret Morris (before SNL).

****In many ways, it was a precursor to The Conversation, one of Francis Ford Coppola's best.

Posted by Chuck Rothman at 6:29 PM

My best friend went to see this, and dragged me and another friend to see it the next weekend, and we went to the drive-in to see it on its second-run. Ahead of its time with all the surveillance going on, and enjoyable white-knuckler. I need to find this and see it again, thanks for the reminder!
Stewart

"_an_ enjoyable white-knuckler", of course.

I have to disagree with your note about "The Conversation." I found that movie to be so boring and full of unlikeable characters that I left the theater halfway through! (I've only done that for two movies in over 50 years of movie-going.) "The Anderson Tapes" is a far, far superior film!
Stewart