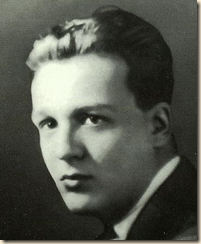 When I was growing up and reading science fiction magazines and anthologies in the late 1960s, I was delighted to realize that most of the authors I enjoyed were still alive and writing, so I could look forward to reading more of their work.  There were only four whose stories I loved, but who had died -- Henry Kuttner, Cyril Kornbluth, Cordwainer Smith* -- and Stanley G. Weinbaum.

Like Smith, Weinbaum burst on the scene with a single story.  Bur whereas Smith's "Scanners Live In Vain" appeared in an obscure and soon-to-fail magazine, seen only by a small audience, Weinbaum's "A Martian Odyssey" appeared in Wonder Stories, at the time one of the major magazines in the field.  And it was one of the most influential stories in the field.

Oh, there were aliens in science fiction previously:  Martians, Venerians,** etc.  The problem was that they were just human beings in funny suits***.   This was even true in the case of top writers like H.G. Wells, whose Martians were just British colonial soldiers with better weapons.

"A Martian Odyssey" is the story of Dick Jarvis, a member of the first Earth expedition to Mars, who crashes his exploration rocket 800 miles from the base camp.  He decides to walk back, and meets up with a creature he names Tweel.

Tweel is a memorable, a birdlike creature who Dick rescues from being eaten by a Martian predator.  He leaps long distances, landing on his beak, and is clearly intelligent, even if he only can pick up about a dozen human words and is amused by the idea that two different objects could both be called "rock."  Yet he manages to communicate some very sophisticated concepts.

But Tweel isn't the only novel alien in the story.  There were the pyramid makers, a very odd form of silicon-based life.  There were predators, and the barrel creatures, who are building tunnels underground.

All these aliens have their own motives and habits, often very different from human ones.  Jarvis's journey is one of the most remarkable ones in science fiction, even today.

Weinbaum was far from a one-story author; he wrote a series of stories set in the same universe as "A Martian Odyssey," and fairly scientifically accurate for their time.  There was also "The Adaptive Ultimate," a story about a woman who after undergoing a medical experiment, is able to adapt herself into becoming whatever she needs to be, and nearly takes over the world.****

But though Weinbaum leapt to the head of the science fiction writers of his day, it didn't last for long.  Eighteen months after the publication of "A Martian Odyssey," he was dead of lung cancer.

Weinbaum's legacy remains throughout printed science fiction.***** The goal throughout the genre is to create memorable aliens who aren't motivated in the same way humans are.  Nearly all writers in the field have read "A Martian Odyssey" (in 1970, the Science Fiction Writers of America voted it the second greatest short story in the field), but many SF fans have never encountered it.  Luckily, it seems to have fallen in the public domain, so it can be found at The Gutenberg Project.

*Actually, Smith died in 1966, about when I started reading, but had stories in the pipeline for a few more years, so I did get to read new stories by him.

**A much more elegant construction than "Venusians."

***This reached the height of absurdity when you had squid creatures lusting after human women.  While human perversity has no bounds, it's a bit absurd to think they'd think they were the slightest bit attractive.

****I'm sure feminists would have a field day analyzing this one.

*****TV and movies are another thing.  Aliens in media are either evil, godlike, or metaphors. The idea that they might be different and unknowable just doesn't exist.