Oh! What a Lovely War! 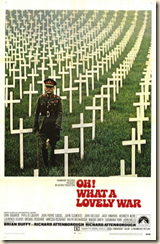 World War I was an ugly war, with thousands dying in pointless attacks -- men against machine guns, with the men always losing.  During the silent days, there were movies about the war, but by the 30s, there was a general dislike of it, along with the idea that it was all caused by munition makers trying to increase their profits*.  Once World War II came along, World War I movies were rare.  Fighting Hitler was unambiguous and the deaths in combat were more than justified; fighting for muddy ground in France was less so.  There were surprisingly few movies made about the period, and far less about the western front in France.

Of course, by the mid-60s, war in general got a bad name due to Vietnam.  That's when British stage director Joan Littlewood got an idea that should have been obvious:** World War I was the perfect backdrop for an antiwar play.  And the proper setting for an antiwar play -- especially one laced with satire and vitriol -- was a musical.

Thus, Oh! What a Lovely War! was created.

Littlewood decided to use songs from the era -- cheerful and inspirational ditties about going off to war.  In addition, she set the play on an amusement park wharf, contrasting the cheeriness of the crowd with the realities of mass death.  The play was based upon official records, newspaper stories, opinion pieces, and other writings at the time of the war.

The result was a vicious satire of war, contrasting the optimism with the reality in a way that was both horrifying and funny.  When the play moved to New York, it won a Tony and was nominated for three more (including Best Musical).  And, in 1969, Richard Attenborough made a film version.

Attenborough had been an actor, and this was his first chance at filmmaking.  Len Deighton (at the time a best-selling author of spy thrillers) wrote the script. *** An all-star cast was assembled and the film was made.

It was superb. The amusement pier was a perfect metaphor, with the rides representing the battles.  The cheerfulness was constantly upstaged by the insanity, making the entire film one of the most biting satires ever made.  You would switch from smiling to being appalled as you saw the incompetent leadership, the pointless bravery, and the many ways the war hurt a particular family.

I don't have much information, but I doubt the film did all that well. Since most of the actors were just putting in short appearance, though, I suspect they were paid relatively little, so it wasn't a total flop.

Attenborough went on to make some film classics, with films like A Bridge Too Far, Gandhi, and Chaplin.  But his first film seems to have faded from memory.

*One Superman comic from 1939 made this point explicitly, a sign of how pervasive the idea had permeated the culture.

**One of the signs of a great artist is to find ideas that no one has thought of, but seem obvious afterwards.

***Deighton, who had bought the rights, took his name off the film, though he later regretted it.