Night of the Comet 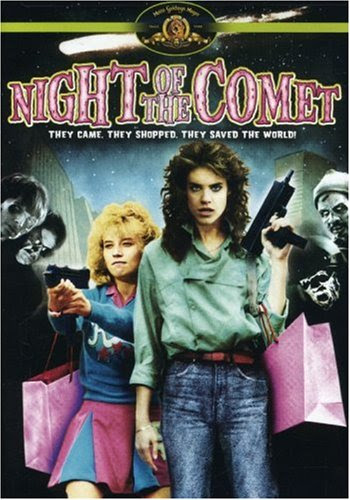 Back in the 80s, the Valley Girl stereotype burst on the popular culture scene.* A variation on the "dumb blonde" stereotype, replete with it's own over-the-top "Valspeak" slang, it provided a quick laugh throughout the 80s, and the stereotype is still lively today.  In the middle of the fad, director/writer had an inspired idea:  combine Valley Girls with zombies**.  The result was Night of the Comet.

Regina Belmont (Catherine Mary Stewart) works in a movie theater the night the Earth passes through the tail of a comet, and large crowds*** gathers to watch.  Catherine, though, can't see it and spends the night with her boyfriend in the steel-lined projection booth at the theater.

In the morning, everyone is dead, turned to red powder.****  Her boyfriend is then killed by a pack of zombies, people who only felt the partial effect of the comet. Catherine's sister Samantha (Kelli Maroney) also survived, hiding in a steel garden shed, and, like all Valley Girls, they do what they have to do -- go shopping.

The movie is a mix of zombie horror and comedy.  They meet up with Hector (Robert Beltran), a truck driver who managed to avoid exposure and go to find some scientists who set up an underground bunker to survive.  But the scientists aren't to be trusted.

There are some very funny moments and lines, as well as touching ones, and, of course, plenty of action.  The girls, who were taught self-defense by their army officer father, start to outgrow their Valley Girl-dom, and find others who haven't been affected by the dust.

It interesting how the movie was a forerunner of some better know series.  Buffy the Vampire Slayer took on the idea of kick-ass teenage girls taking on supernatural threats, with wisecracks and some personal issue on the side, and Shaun of the Dead also has many parallels (e.g., Shaun goes where he's most comfortable -- the pub -- as doe the girl, who go to the mall).

The movie was a modest success (helped by its small budget), but was quickly forgotten.  Director Thom Eberhardt did nothing that stood out all that much (his best-known film after this was the Sherlock Holmes film Without a Clue, though it appears he directed some episode of Space Rangers).  Robert Beltran did become a familiar face as Chakotay in Star Trek: Voyager, but the rest of the cast never really broke out (not counting Mary Woronow, who was already an indie-film goddess starting with Eating Raoul).

But I can't think of the movie without a smile, especially one line:  "Daddy would have gotten us Uzis."  It was a film ahead of its time, and is still a lot of fun.

*Coming from one of the unlikeliest of sources to form a major fad -- Frank Zappa's song Valley Girl, his only top-40 hit.

**A juxtaposition that's still being played out on the best-seller list today.

***Who obviously never read or saw The Day of the Triffids.

**** Foreshadowing the fate of the crew of the Red Dwarf.  One nice touch in Comet is that the victims' clothes are untouched -- they lie in a pile atop their remains.

Posted by Chuck Rothman at 3:08 PM

I first saw this film late one night on TV, probably in the late 80s, and instantly fell in love with Catherine Mary Stewart. She was how I imagined the perfect American girlfriend would be! Sadly, I don't think we saw much of her over here in the UK. The only other thing I can remember her being in was playing the (perfect) girlfriend in 'The Last Starfighter'.

The film is hugely derivative, but also has a certain charm of it's own and, of course, it has the lovely Catherine Mary Stewart as well. There are many, many worse ways of spending your time than watching this film should you happen to come across it in your EPG!

I first saw "Night of the Comet" with a bunch of friends, at the last drive-in in Austin, on a double bill with "Godzilla 1985". It was clearly the better of the two movies.

And to this day, "Daddy would have gotten us Uzis" is still a catch phrase in that circle.