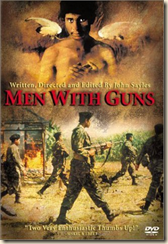 I live in Schenectady, NY. And Schenectady's biggest contribution to movies is John Sayles.

Sayles is one of the top independent filmmakers.  He started as a writer, and began working with Roger Corman on Piranha and Battle Beyond the Stars. He also wrote and directed his first independent feature about this time with Return of the Secaucus Seven, sort of a template for The Big Chill. He continued with many indie successes in 80s and 90s.

Sayles never looked to be popular.  So when he had his a moderate success with Lone Star -- probably enough to go Hollywood -- he followed it up with as un-Hollywood a film as could be made:  Men with Guns.

The film is set in an unnamed Latin American country.  After the death of his wife, Dr. Humberto Fuentes (Fredrico Luppi) goes into a remote village to search for some former students who are reported lost.  As he travels, he meets with other along the way through the war-torn countryside, showing things to the doctor that he never imagined in his comfortable life. The title refers to the facts of life in the countryside:  men with guns come and order people around.

Sayles went far off the beaten path for this. First of all, the movie was shot in Spanish, with actors unknown to US audiences (other than a small role for Mandy Patankin, probably to get funding).  And he suffered the consequences:  poor box office, of course.  Despite some very good reviews, there was little interest in the US in a foreign language film by an American director.

Sayles, of course, isn't interested in making blockbusters.  He continues to work, scraping up money writing screenplays and occasionally acting, as he finances some of the best independent films you'll ever see.

But the result is stunning.  The ending especially is a very surprising twist, and Sayles leads you to it perfectly.

Important Note: There is a second Men with Guns -- a routine ultraviolent gangster shootup film.  Don't be confused.

Posted by Chuck Rothman at 3:39 PM