If you've ever seen it, one of the most memorably bizarre animation techniques in early TV (or ever) was Syncho-Vox.  Cambria Productions invented the technique because it was a cutting edge way to ... oh, hell -- they did it because it was cheap.  It's expensive to animate lip movements, so Cambria came up with the next best thing:  live action lips superimposed over a cartoon face. To save even more money, many scenes hid the characters mouths completely.

The effect was bizarre. Not only were the lips coated with dark lipstick to make it stand out, but the actors spoke with exaggerated lip movements so the audience could see the technique.  Of course, the name most closely associated with this was Clutch Cargo. It was a big enough success to spawn Space Angel. 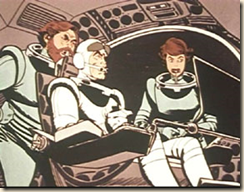 Space Angel was a code name of Scott McCloud, a square-jawed and eyepatched astronaut and investigator for the Earth Bureau of Investigation.  With his crew Crystal and Taurus**, they faced threats throughout the solar system.

The science fiction angle caught my attention, of course, but the show also looked better than most cartoons of the time.  Oh, the animation was lousy and the Synchro-Vox just plain weird, but the drawings had a look to them unlike anything else.  And for good reason.  The show was an early assignment for Alex Toth.  Toth was very important both in comics and animation, and his designs for the show really stood out.

The plots were standard science fiction, with each adventure running five minutes a day for five days.  Stations would run it Monday through Friday on their kid's shows; the Friday show would resolve the story.

The show ran for a couple of years before moving on. To a budding science fiction fan like me, it will always be a fond memory.

*With his pals Spinner and Paddlefoot.

** Whose accent is quite reminiscent  of Scotty's from Star Trek.

Posted by Chuck Rothman at 9:05 PM

I really enjoyed SA as a kid. The design work by Toth was terrific looking,and those moving lips were certainly attention grabbing.

I remember being disappointed whenever the afternoon kid's show that featured SA would have on Clutch Cargo instead of SA.