I've been a fan of Cole Porter ever since I had a role in the musical Anything Goes when I was in college. I still think he was one of the top American popular song composers.* And Porter had a complex and unusual life.  So when I heard that there would be a musical biography of him, I made it my business to see it.

The movie shows Porter (Kevin Kline) at the end of his life, when Gabe (Jonathan Pryce) comes by as his life is flashing before his eyes -- as a musical.

It's an interesting conceit, and gives the film a structure instead of moving from scene to scene. In addition, it allows Porter to view and reflect on the things he did -- triumphs and mistakes. 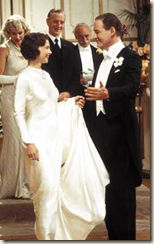 The central story involves his relationship with his wife Linda (Ashley Judd).  Porter was gay, and made no secret of it to Linda, who accepted it as part of him.  There were problems, of course, but when Porter had his biggest crisis -- getting his legs crushed by a horse while out riding -- she comes back to him.  The movie implies there is a real fondness between them, even if they were sexually incompatible.

Kline is always an interesting actor, and he really brings Porter to life -- showing him to be a man with a cheerful outlook and unconventional sexuality.  When he breaks into "Be A Clown," the movies is an especial delight.

Ashley Judd is also fine as Linda, who cares for her husband more than he does for her.

The movie was sprinkled with great Cole Porter songs, of course, some sung by Sheryl Crow, Elvis Costello, John Barrowman,** Alanis Morrisette, and Natalie Cole.  And, of course Kline is no slouch as a singer.  The songs alone make the movie worth watching***.

Alas, the film did poorly. It got some critical pans (including a lot of nitpicking by critics who were too concerned with accuracy over drama), and was too much of a niche film to be a blockbuster.  It appeared to have lost money overall.

But if you don't mind a few narrative conceits and some great songs, you just might want to check this out.

*The American popular song genre is called "The Great American Songbook" these days, and really reached its peak in the 1930s.  My list for the best would start with George Gershwin (and Ira Gershwin), Porter, Irving Berlin, Harry Warren, and Jerome Kern.

**Long before I saw him as Captain Jack Harkness.

***I do wish they had found a way to include "Always True to You in My Fashion," one of my favorites and also a song often considered to encapsulate Porter's feelings about his relationship with Linda. But I can understand the omission, since it would be hard to perform the song in a way to make the parallel clear.

Posted by Chuck Rothman at 9:24 PM