Added 6/21/2010:  Edited now that I have new information (in green).  The main article remains the same for historical purposes, but see the note at the end. 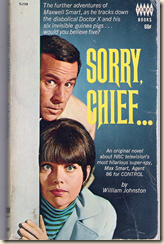 William Johnston is a mystery.  I've never seen any biography (even on the books he wrote).  I have a strong suspicion that the name is a pseudonym.  It's even possible that multiple writers used the name. His books are long out of print -- all paperback originals tied in with gimmicky TV shows.

He also wrote some of the funniest stuff I've ever seen.

I loved the TV show, and bought the first book back when it was out.  I liked it so much that I read all the titles through Sorry, Chief . . . , buying a couple (I still have my copy of Sorry, Chief . . . ) and borrowing the rest from friends.  I also picked up his novelization for Captain Nice in a remainder bin.

Johnston was funny.  His strength was long, strange conversations, filled with catchphrases (some from the show, others for the book alone).  I can still get a smile from the phrases "six invisible guinea pigs," or "Vot you doink in mine staderoom?", things that came up time and time again, with wildly funny variations in Sorry, Chief. . .

Johnson also wrote a series of Happy Days books, one or two Flying Nun books, and a novelization of Klute*. There also appears to be a standalone novel, Sam Weskit on the Planet Framingham, which I'm sure didn't do all that well**.

In any case, Johnston disappeared in the mid-70s.  My feeling is that he was a pseudonym*** and he just moved on.  I would love to find out who he was, and also to see that his work returns to print.  With all the trademark issues, that might be impossible, but one can always dream.

On June 18, 2010, the mystery of William Johnston was solved. I had guessed wrong:  the name wasn't a pseudonym at all.  In any case, see Lee Goldberg's blog for the facts.

** The problem of writing novelizations is that no one remembers the author's name (other than Isaac Asimov for Forbidden Planet, but most people think the movie was made from the book, not vice versa).

*** If anyone knows, I'd love to find out. I have a suspicion it might be Ron Goulart, but I could be way off.

Posted by Chuck Rothman at 8:19 PM

Sometimes, usually on a Saturday, my mother couldn't get a babysitter and would bring us along to the escrow office she ran in a little shopping center somewhat north of Seattle. For lunch money, and to keep out of her hair she hand us each a dollar and we'd go explore. This was in the mid-sixties and was just enough to buy her a few hours of peace.
Me and my brother would head over to lunch counter at the Grocery Boys store. A hamburger and fries left enough for a 50 cent book, or a comic and some candy.
One time I faced the spinner rack and saw a Get Smart! book and my heart stood still. Want it want it want it.
But wait... 60 cents? One full dime more expensive than the books I usually bought. A ridiculous price! I couldn't see supporting the publishers in this unwarranted inflation, it might give them ideas. Most importantly, I couldn't buy it And a hamburger and fries.
But... I couldn't see walking away from Get Smart, either.
So that day I learned something about budgeting, and bought just a hamburger and Get Smart!
And you know, I've never regretted it, but sometimes I buy extra fries.
By the way, I've read and enjoyed the novelization of Forbidden Planet and it was by Philip MacDonald, under the pseudonym Will Stuart.

I would say that the extra dime was probably worth it. :)

Everything you always wanted to know can be found here, guy.

That information can now be found here:
http://www.leegoldberg.com/william-johnson-named-tiein-grandmaster-for-2010/

Asimov's well-known novelization was of the movie "Fantastic Voyage". I checked on Wikipedia to make sure he did not also write the novel for "Forbidden Planet". Evidently that was Philip MacDonald.