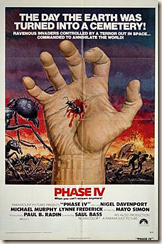 Every film fan is familiar with the work of Saul Bass, even if they may not know it.  He made his reputation by designing some very striking movie posters.  But Bass moved on from there to be a title designers and is considered the genius in creating title sequences.  Before he came along, titles were static affairs, a card showing the name of the movie and its stars.  Bass turned things around with a more dynamic style that was the beginning of the modern title sequence.  Bass's titles included moving text, stylized graphics, and many innovative techniques still in use today.  Some of his credits include The Man with the Golden Arm, Around the World in 80 Days, Vertigo, North by Northwest, Psycho, Goodfellas, Casino, and many others.

But like everyone in Hollywood, Bass wanted to direct (especially something that lasted more than five minutes).  So, in 1974, he directed the film Phase IV.

The film is ostensibly a horror film, but there's much more to it. Dr. Ernest Hubbs (Nigel Davenport) discovers a new breed of ant in the desert, one that seems to be developing sentience.  Worse, they have figured out a way to destroy their enemies and may be moving to destroy their biggest enemy of all -- man.

He takes James Lesko (Michael Murphy) and Kendra Eldridge (Lynn Frederick) to and experimental station to study them to find a way to defeat them.  But they don't want to be defeated and soon they are trapped by a hive mind that may be smarter than they are.

The movie stays away from the cliches and camp of the genre.  The ants make a very credible enemy, and the ending is a real surprise.

The film is brilliantly designed; the images are as memorable as those in Koyaanisqatsi  or Days of Heaven. The ants are photographed in extreme close-ups, making them memorable foes.  They are the real stars of the film.

The film flopped.  A mystical, cautionary tale about ants attacking humans is not going to do well in the box office.  Bass never directed another feature.

But it's a thinking person's horror film that has something to say, and deserves to be better know.

Posted by Chuck Rothman at 8:54 PM

I saw half of this on a double bill with "Logan's Run" and then again on TV a year later. I have not seen it since but some of the images are still strikingly vivid in my mind. It was strange stuff for a 10-year-old, I guess.