America thinks of itself of a classless society, but that's not entirely true.  Certainly there is more mobility from one class to another, but there are enough differences to be the fodder for this show.

Arnie was the story of Arnie Nuvo (Herschel Bernardi).  He had been perfectly happy to work at the loading dock at Continental Flange, until one day, his path crossed with the company's owner, Hamilton Majors (Roger Bowen).  He helped Majors out with his clear-thinking basic advice and, as a reward, Arnie was promoted to Vice President of Product Improvement.

But Arnie didn't like it.  The change in situation didn't sit well with him, especially since it lost him some of his friends.  And he was always being asked to solve problems that were based on Major's blithe assumption that Arnie was used to the world he had been thrust into. Arnie depended on help and advice from his wife Lillian (Sue Ann Langdon) and his old buddy from the loading docks, Julius (Tom Pedi). 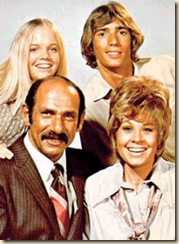 The show was helped by the casting.  Bernardi grew up in the Yiddish theater and had replaced Zero Mostel in the lead of Fiddler on the Roof. Arnie was a warm character, a man who tried his best, and Bernardi made him a sympathetic hero.

But the real comic delight was Roger Bowen.  Bowen is know -- if at all -- for playing Henry Blake on M*A*S*H. No, not the TV show, the movie*. In Arnie, he was clueless, making assumption about Arnie and seeing the world through his private school background.  Unable to understand that Arnie didn't share his assumption, he caused problems for his new vice president -- and was always funny on screen.

Joyce Van Patten was an early entrant in the hot-wife-of-dumpy-sitcom-hero sweepstakes and was very loving and supportive of all that Arnie would do.

Arnie did well enough the first season, when it was shown on Saturday night.**  When it was renewed, though, CBS blundered.  It moved to Monday.  At 10:30.  This was a horrible time for a half-hour show; at that point, the last show with a 10:30 start was six years previously.  But it got worse.  It was up against Monday Night Football and an NBC movie.  Not surprisingly ratings dropped and it was canceled.

Bernardi continued on Broadway and as a guest star and voice actor for commercials (best known role:  Charlie Tuna and the Jolly Green Giant).  Bowen never seemed to catch on anywhere other than as a guest star, and Van Patten kept busy in minor roles.

It was a small gem of the show and begs for rediscovery.

*In a strange coincidence, Bowen died one day after Maclean Stevenson.

**Yes, in the 70s networks still did original programming on Saturday.

Posted by Chuck Rothman at 8:17 PM

I believe the wife was played by Sue Ane Langdon, not Joyce Van Patten.

I remember this show "Arnie" very well. I'm 58 now, so I grew up on this, when TV was golden. Unless I'm mistaken, this show never came out of the vaults after the series was cancelled in 1972, as many others were later to be shown on classic TV channels like NICK at Night, TV Land, RetroTV, MeTV, and other nostalgic channels. It's long overdue for Arnie to be taken out of obscurity. I like Arnie, so please bring it back.

I was only eleven years old when Arnie was on, but I loved the show. I'm happy to be able to see a few episodes on line.

It might have been more realistic if Arnie Nuvo would have been promoted to Plant Manager instead of an executive position, but anything can happen in sit com land.

Remember the one about the sixteen year old doctor?

It's a shame you never mentioned Arnie's secretary, Felicia - played by Elaine Shore. They had many episodes where she kept Arnie "in check" - and the comedy was especially crisp with her in the office.

Yes it is. But it's been forever since the show. I'm sorry Felicia.I can't remember everyone. Hope somehow the show "Arnie" will appear on a classic TV channel.

I own the entire series on DVD. The DVDs are not great quality, but viewable. Arnie deserves to be reran in TV Land on Retro TV or This TV or Antenna TV or even Me TV. Unfortunately, it probably isn’t available for syndication, maybe never will be. I guess this little gem of a television sitcom is lost forever 😔 Except for my low quality collection of Arnie DVDs.