In His Own Write/A Spaniard in the Works (book) 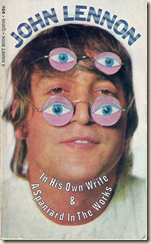 The Beatles are the popular culture giants of the 60s, and possibly of the entire 20th century.  Their influence is everywhere -- music, movies, TV (The Monkees, most obviously), art and design (their record covers were groundbreaking), style, and just about everywhere else.  Even literature.  What is odd is that their -- or rather, John Lennon's -- influence in the area of books is often forgotten.

Back in 1964, when Beatlemania was in full bloom, Macmillan Publishers in the UK published a slim volume of short poems and vignettes and art by Lennon called In His Own Write.  I have no doubt that this, like many things associated with the Beatles, was just an attempt to cash in before the group was forgotten.*

But a funny thing happened:  the critics loved it.

The book is just a collection of what would today be called "flash fiction," usually describing a particular character -- "Partly Dave, "Good Dog Nigel," "Treasure Ivan" -- and filled with wordplay and somewhat surreal dark humor.  A favorite of mine is "A Suprise for Little Bobby**":

It was little Bobby's birthmark today and he got a surprise. His very fist was jopped off, (The War) and he got a birthday hook!
All his life Bobby had wanted his very own hook; and now on his 39th birthday his pwayers had been answered. The only trouble was they had send him a left hook and ebry dobby knows that it was Bobby's right fist that was missing as it were.
Whatto do was not thee only problem: Anyway he jopped off his lest hand and it fitted like a glove. Maybe next year he will get a right hook, who knows?

As you can see, it's funny and somewhat sick.***  And there's a lot of suppressed (and unsuppressed) violence in the stories, beneath the humor.****

The wordplay and puns were dazzling, and the stories were all very funny to read.  My favorite comment about the book was the review from Newsweek, which calls it "Frothing with original spontaneity. . . suggests that when John Lennon sings I Want to Hold Your Hand, he is wishing he could bite it."

My favorites here include "Partly Dave," "No Flies on Frank," "The Wrestling Dog," "Good Dog Nigel," "Deaf Ted, Danoota, and Me," and "I Remember Arnold."

The book was a hit, big enough for a sequel.  The next year saw Lennon's A Spaniard in the Works (a pun on the British phrase "A spanner [wrench] in the works.").  It wasn't as surprising as the first (no one had expected the Beatles to actually be literary), but still has plenty of the same sort of foolishness.  I think Lennon was working a bit too hard to attempt the sequel, so it does go overboard a bit, but there are still gems like "The National Health Cow."

Both books are enlivened by Lennon's illustrations -- insane little line drawings that either illustrate a story or just stand alone.

At one point, the books were turned into a play, but by the mid-70s, interest waned.  Ironically, these were one of the few things done by the Beatles that have faded away with time.  It seems to now be out of print

The books deserve to be rediscovered.

*Few believed at the time that the group would be anything other than a flash in the pan.

*The Table of Contents has it as "Surprise," but the actual story uses "Suprise."

***Or as they'd say today, "not PC."  But I was a big fan of sick humor simply because there were no taboos.

**** Michael O'Donoghue must have loved it.  O'Donoghue was a former National Lampoon writer and one of the original Not Ready for Prime Time Players (no one remembers that), who had a strong belief that all humor was violence, and the violence was funny.

'Deaf Ted, Danoota & Me' was featured on the Peter Cook and Dudley Moore show 'Not Only But Also'. Lennon himself read it. Its one of the few items from that show to still exist.