I'm a big fan of metafiction -- stories and movies about stories -- and certainly the most metafictional TV show of all time was It's Garry Shandling's Show.

Shandling had started out in Hollywood as a writer, contributing scripts to Sanford and Son; Welcome Back, Kotter; and Three's Company. After an automobile accident, he decided to go into standup and became so successful that he became a regular guest host on The Tonight Show. 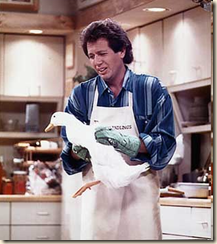 So, like many comedians, he decided to do a sitcom. Joining with Saturday Night Live veteran writer Alan Zweibel, they created It's Gary Shandling's Show.

The show was a sitcom about Garry Shandling's sitcom.  Garry and the rest of the cast knew they were in a sitcom, and could do various sitcom tricks with the conventions of the genre.  Take, for instance, the well-remembered theme song:

Gary would do his "time thing" to cut to a later time of the day without showing it. He would talk to the audience, of course*. The studio audience was an integral part of the show (I recall one show where he talked about big band music, and the cameras showed the studio audience, all with little toy trumpets, moving back and forth in unison in time to the music. Gary commented, "That's a really big band.").

The show was an early success on Showtime (one of their first original series), but gained many more fans when the new Fox Network picked up the reruns and ran them on Sunday night starting in 1989**.

As a sad footnote, the show was the last TV appearance of Gilda Radner before her death. In a funny but poignant exchange, Shandling asked why he hadn't seen her in awhile.  Gilda replied, "Oh, I had cancer. What did you have?"

Eventually, the show ended and Garry moved on. He scored a big success with The Larry Sanders Show, but times since then have been difficult.  After the notorious flop What Planet are Your From?, he seems to have had few credits, returning to standup.

The show has been overshadowed by Larry Sanders, but it was a funny take on sitcoms with an audacious premise that always delivered.

**The Fox Sunday night schedule in this time frame was one of the better lineups comedy line-ups of all time, with Married With Children, Shandling, Tracey Ullman, and Duet.

Posted by Chuck Rothman at 9:38 PM

Your right, great theme song. "Here's the part where I whistle".