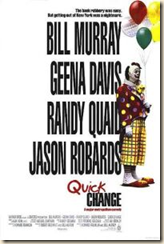 There's a comment in My Dinner with Andre to the effect that New Yorkers don't leave the city because it's their own prison, and they can't.  Quick Change demonstrates this in a literal -- and very funny -- way.

I've mentioned before that a bad name can kill a film. In addition, if your film is best appreciated by a small segment of the movie audience, you're going to have even more problems, even with a popular star in the cast.  And if the film is hard to describe in a nutshell, you might as well give up.

These were the hurdles facing Quick Change. It is a particularly nondescript title that really didn't do a good job of describing what was going on.  It was a comedy, but the jokes were best appreciated by native New Yorkers, and any plot description makes it seem like a heist film instead of a comedy.

Bill Murray was riding high after the success of Ghostbusters and Scrooged, and evidently loved Howard Franklin's script. But he didn't want to mess it up, so Murray decided to codirect with Franklin.

The movie starts out as a bank robbery/caper flick. Grimm (Murray), a man dressed as a clown -- in full makeup -- starts by robbing a New York City bank and taking hostages.  Through an ingenious ruse, Grimm and his friends Phyllis (Geena Davis) and Loomis (Randy Quaid) get away with the money and elude the police. All they have to do it get to the airport and fly off to a life of luxury.

And that's when their troubles begin.

It becomes impossible to get there. Roads are blocked, traffic is jammed, buses go nowhere.  They are robbed, have their car fall into a ditch, and generally get caught up in various weird comic catastrophes. Meanwhile, Chief Rotzinger (Jason Robards) catches on to Grimm's ruse and starts to look for him.

Murray's usual ironic detachment serves him well, though it patience is sorely tried by what fate throws at him.  Some consider this one of his best roles (at least until Lost in Translation).

Geena Davis is good as always, and Randy Quaid plays the type of role that he specializes in:  the somewhat bewildered sidekick.  And Robards is also fine as the world-weary cop who always gets his man.

The film is probably best appreciated by New Yorkers, but anyone can understand the feelings when you keep getting thwarted in what you want to do.  It did only so-so at the box office, helped that, despite the names in the cast, it was shot for a low budget.

Murray hasn't directed again (yet), and Franklin hasn't been much in evidence -- two other films, including The Public Eye. But when I think of Bill Murray, I'll always remember him as the "crying on the inside type of clown."

Posted by Chuck Rothman at 8:04 PM

Quick Change is absolutely one of the funniest movies I have ever seen. Great good time. I'm glad it's getting some recognition.

Quick Change is a great movie. Its a re-make though of a 1985 Hold-Up directed by Alexandre Arcady starring Jean-Paul Belmondo and Kim Cattrall. I thought the original was better than the remake - the original focuses on the heist.