When I first started getting into science fiction in the early 60s, one of the interesting part of the field was that all my favorite authors were still alive and producing work.  It was nice to know there'd be a new Heinlein novel, or Asimov short story, or there'd be new new stories by Larry Niven, James Tiptree, Jr..   and others.  At the time, there were only three of my favorites who had died:  Stanley G. Weinbaum, Henry Kuttner, and Cyril M. Kornbluth.* 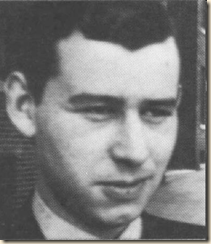 Kornbluth was a member of the legendary Futurians science fiction group and started writing young; his first story was published when he was 17. He went on to write a series of excellent short stories, using his own name and a series of pseudonyms.

He was primarily a short story writer. He did publish several novels -- some in collaboration with fellow Futurian Frederick Pohl -- but, like many of the best SF writers of the 50s and 60s, was at his best with short works.

By far his best-known work was "The Marching Morons," which postulated a world where intelligence was bred out of the human race. A man from the present is awakened after centuries of hibernation and becomes the one responsible for dealing with the problem.  If the plot sounds familiar, it's because the film Idiocracy took it almost wholesale.  I loved the movie, but I was annoyed that they gave Kornbluth no credit.

"The Little Black Bag" is also fairly well known, since it was used as an episode of Rod Serling's Night Gallery. It's assumes a similar background to "The Marching Morons," except in reverse, where an artifact from that time period (a doctor's bag) is sent to the present.

I'm also fond of his "MS Found in a Chinese Fortune Cookie" about a man who discovers a way to save the world, but who is stopped by a cabal of a very unlikely sort.

"The Rocket of 1955" -- the name sounded quite futuristic when it was published in 1945 -- was the anatomy of a very clever scam, while "Thirteen O'clock" was an enjoyable fantasy romp with a sexy little pixie woman whose main weapon plays upon the lust of men by offering to shrink them down to her size. "Time Bum" is about another con, with a clever twist.

Alas, Kornbluth had health problems.  He suffered from heart disease and eventually died of a heart attack after shoveling snow and then running for a train.  He wasn't quite 35.

He did have the distinction of winning a Hugo Award for Best Short Story 15 years after his death for "The Meeting," a story finished by Fred Pohl from a section of story that Kornbluth never completed. "The Little Black Bag" won a retro Hugo award in 2001.**

NESFA Press has published a collection of Kornbluth's short stories.  It's a good place to discover one of the field's forgotten greats.

*Cordwainer Smith died about the time I started reading, but some of his stories were still in the pipeline.

**Retro Hugos gave awards to people for stories written in the years before the Hugo Awards were officially given.  Though an honor, it says more about the staying power of the stories than whether they would have won back then.  There is confusion as to what exactly they represent -- what people would have thought were winners at the time, or what stories are best remembered today.  I'd assume the latter, since they are generally well-known stories.  But back in the 50s, some forgotten stories won (most obviously, They'd Rather Be Right by Mark Clifton and Frank Riley, a book that hasn't been in print since it won).

Posted by Chuck Rothman at 9:53 PM

Found this post because you mentioned my father, Cordwainer Smith. Did you know that Stanley G. Weinbaum -- whom you mention as being one of your favorites back in the 60s -- just recently won the 2008 Cordwainer Smith Rediscovery Award? Details on my page about Weinbaum:

It's an honor to hear from you. I hadn't head that, but Weinbaum was always a favorite of mine.